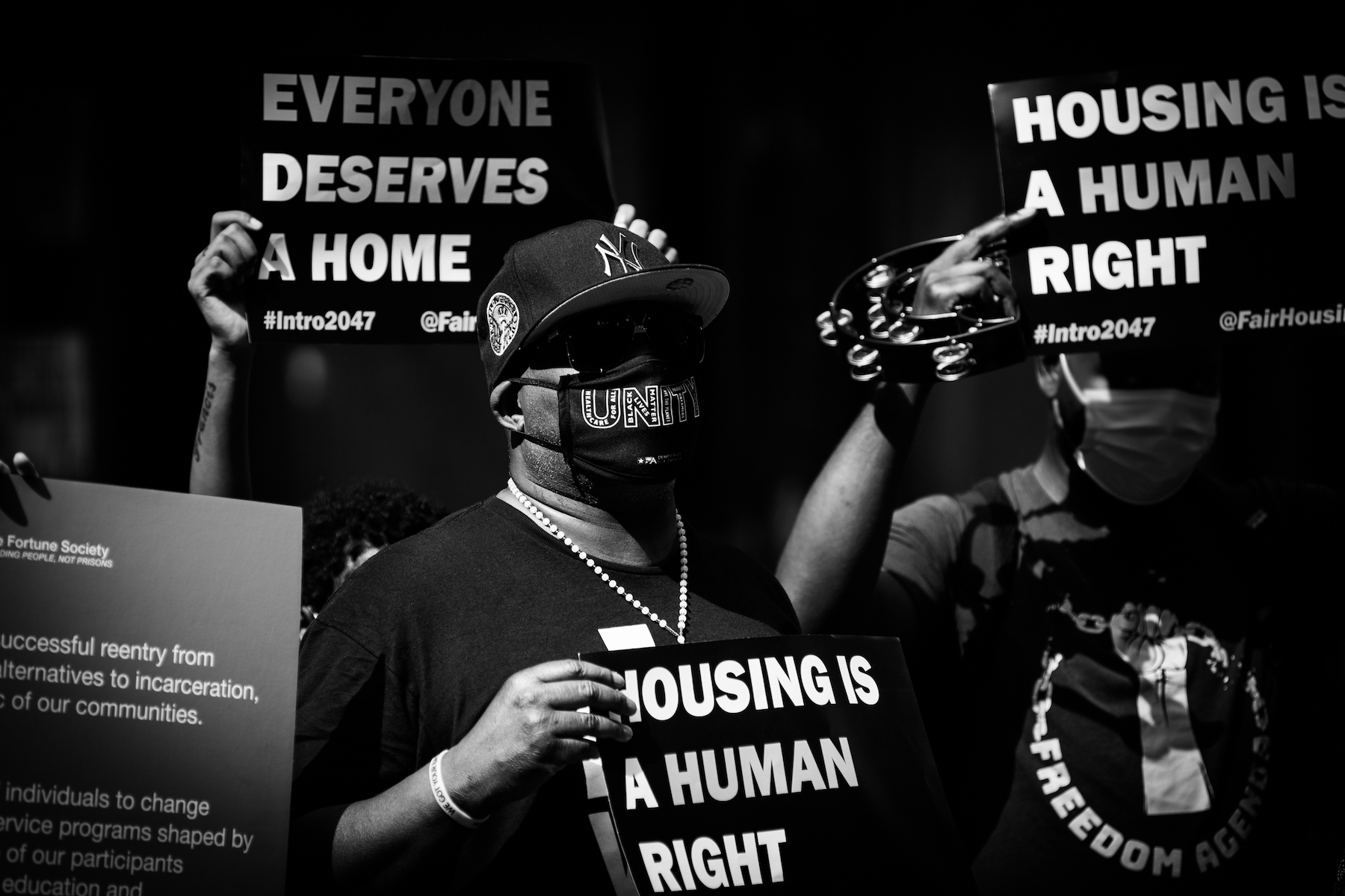 Jeroen Stevens, 'Housing is a Human Right', protest rally against the prison-to-shelter pipeline, marching from the Manhattan Detention Complex known as the 'Tombs' to Bellevue Men's Shelter on 30th Street, August 19, 2021
Revolving doors between mass incarceration and homelessness are wracking black American communities. More than half of New York's adult black men are currently under correctional control ' in prison or jail, on probation or parole. Allegedly 'free', but labeled as 'felons' for life, formerly incarcerated remain barred from mainstream society. Regardless of having 'done their time', survivors of correctional custody are almost ten times more likely as their fellow citizens to find themselves homeless. For former 'inmates', 'no home' all too often entails not only 'no house', but also no employment, no vote, no education, no public welfare, and even no food stamps. In turn, rampant criminalization of homelessness increases their risk of ending up again behind bars. Rooted in systemic inequality, this revolving door between incarceration and homelessness masks one of the world's most sophisticated racial segregation doctrines.

The Welcome Home exhibition convenes homeless New Yorkers who were formerly incarcerated and now mobilize art as a radically transformative tool for overcoming trauma among returning citizens. Using photography, poetry, painting, performance, and plastic art, the exhibition interrogates the intersection of incarceration, homelessness and social justice, questioning the barriers that deter former prisoners from finding home. Anchored in lived experience and self-representation, the expo is led by those usually muted, deemed as victims to be salvaged, infants to be patronized, addicts to be redressed, vagrants to be avoided, culprits of their own destitution. Welcome Home claims the art gallery as a pedestal for New Yorkers directly impacted by the mass-incarceration and homeless shelter complex to display and debate the city they encounter upon coming home.

Five participating artists interlace art and activism. Upon release, A.A. found refuge in the leaky attic of a Harlem community church. He now gathers a yearly cohort of former convicts. Amalgamating theatre, drumming, plastic art, and storytelling allows them to confront the social and psychological harm inherited from prison life in a bewildering collective rite of passage. Bullied and abased since his early childhood because of facial deformity and autism, F.G. was battered by the war on drugs as he sought to make a living in New York. As a social justice movement leader, he became a prolific poet, speechwriter and graphic designer. Classified as mentally deranged, G.F. was housed on Ward?s Island mental asylum after circling in and out the American prison system for twenty-three years. With breathtaking paintings, he explores the aesthetic transition from stigmatization towards rehumanization. I.L. fled imprisonment in Egypt and stranded as a homeless transgender women in New York. As a protest leader, she deploys performance art to oppose transgender misogyny and police violence. B.B. is a homeless former ?inmate? fighting the demeaning nature of imprisonment through comedy and satire. Together, the provocative work of these artists will radically question the decrepitude of American social justice and speculate on alternative pathways forward.

*The text above was submitted to apexart's 2023-24 NYC Open Call, and rated by over 700 jurors. Any specific artists mentioned are unconfirmed and subject to change.

Jeroen Stevens is an architect and urbanist currently engaged as post-doctoral fellow at the KU Leuven in Belgium. Interlacing urbanism and ethnography his research and teaching are contingent on collaboration with social movements that push the frontiers of struggles for justice and housing rights in cities as São Paulo, Brussels and New York.