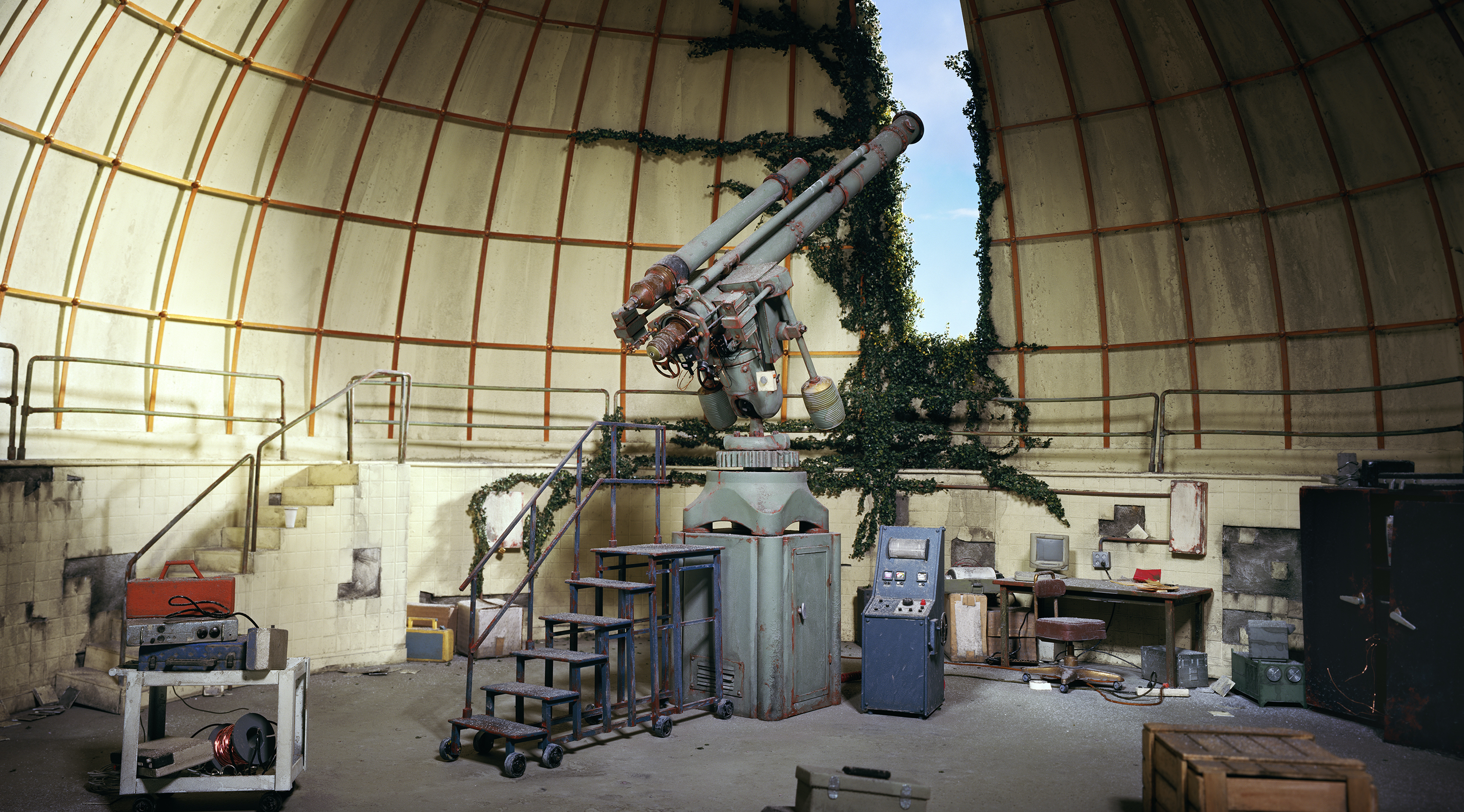 Lori Nix & Kathleen Gerber, Observatory, 2013
x
"That the world of things can open itself to reveal a secret life-indeed, to reveal a set of actions and hence a
narrativity and history outside the given field of perception-is a constant daydream that the miniature presents." (1)
-Susan Stewart, On Longing: Narratives of the Miniature, the Gigantic, the Souvenir, the Collection Archeologists excavating ancient Egyptian tombs in the 19th century discovered not only mummies, riches, and hieroglyphs, but also droves of meticulously crafted miniatures. In tombs sealed since the golden age of the Old Kingdom, they found 4,550-year-old model vessels chiseled out of stone, shrunken mirror replicas arranged alongside life-size versions of the same religious paraphernalia. Stone, however, soon gave way to clay and copper miniatures - tiny versions of funerary priests' ritual equipment, as found before, but also doll-like models of ships, buildings, pets, and people - which were often amassed in great numbers in the tombs and temples of the Sixth Dynasty. In just a few excavation seasons, archaeologists unearthed some 45,000 of these tiny items. (2)

The discovery of miniatures likely did not strike the 19th century explorers as exceptionally odd, however. By this time, miniatures - mostly presented as dollhouses - were all the rage throughout Europe. No one knows when the first small model homes were created, but the oldest ones in existence today - called baby houses - date back about 400 years, to custom-built cabinets that opened up to display pocket-sized idealized rooms outfitted with opulent furnishings, some inlaid with pricey materials such as tortoiseshell and pewter. These early models were not built for children but for wealthy female collectors in England, Germany, and the Netherlands, although some sources contend that a few of the elaborate miniature homes were also used to instruct young ladies on how to manage a household. Only around a dozen of the 17th century models remain accounted for today.

By the Industrial Revolution, miniature collecting was a hobby no longer confined to the very rich. Affordable miniatures had gained popularity among the larger population, especially ones produced by several German companies that excelled at high-quality, handmade dollhouses and furniture. A century or so after the Germans took up this craft, the American Bliss Manufacturing Company across the Atlantic soon began doing so as well. World War I, however, displaced Germany as the primary dollhouse manufacturing and exporting nation, opening up opportunity for competitors in other countries to try their hand at the art of miniatures. Eventually, mass-produced factory-made plastic or metal affairs largely displaced handmade ones, even further lowering the price. As such, in the 1950s, a dollhouse was a quintessential item in any little girl's toy collection. (3)

In the 1970s, interest in dollhouses and miniatures reemerged among an adult audience. As Sally Hoffman, co-founder of the International Guild of Miniature Artisans writes of that time: "The interest in miniatures seemed to start off slowly, perhaps on the west coast, but soon it spread rather all at once, like stars in the night sky, blanketing our continent." (4) Dozens of international, national, and regional societies emerged to connect like-minded miniature enthusiasts, and collectors' shows - regularly attracting thousands of attendees - allowed miniaturists to swap ideas and creations.

Even today, amidst iPads and apps and high-speed gratification, those who pursue the art of miniature collecting remain firmly committed to that centuries-old cause. Why we are so universally drawn to miniatures, however, is a somewhat elusive question.

According to author and English professor Susan Stewart, although miniature objects are diminutive, because of the hours and care invested in creating them, they are paradoxically precious. Those meticulously crafted items also stir within us intense nostalgia for things past. Indeed, many collectors and builders first encountered miniatures as children, and that fondness never left them.

As adults, many discover in miniatures a way not only to represent the world, but also to tame and perfect it, excluding the randomness and entropy of outside forces. "The creation of small worlds gives us the illusion of control," artist Thomas Doyle writes. "In a world that grows ever faster and more chaotic, in a world in which we are bombarded with imagery, artworks in small scales allow us a place of retreat, where time has stopped." For miniature collectors and builders, each doll, chair, tea saucer, and candlestick - all designed to harmoniously compliment the surroundings - has been arranged just so, both in scale and style. This can be exceptionally soothing to viewer and creator. As Stewart summarizes, miniatures offer a serene island in which "the interiority of the enclosed world tends to reify the interiority of the viewer." (5)

Those that move beyond mere collecting, to creating, likewise value miniatures for this unique artistic device. "[Miniatures] give me the ultimate ability to control my environment while satisfying a need to simply work with my hands," says artist Matthew Albanese. "It always seemed to me that the miniature was the most effective solution to experiencing visions of the world and new perspectives that otherwise could not be achieved in life."

Some creators, however, choose to repurpose miniatures - usually so representative of perfection - as mediums for depicting imperfections. Introducing flaws into a carefully orchestrated miniature space not only betrays expectations of such traditional works but also focuses our attention on their deliberately contorted details - a boarded up window, the blackened skeleton of a dead tree, a splash of blood at a tiny crime scene - in a way that life-sized imagery does not.

Frances Glessner Lee, popularly known as "the mother of forensic investigation," knew this all too well when she created 20 dollhouse crime scenes in the 1940s and 50s, which she called the nutshell studies of unexplained death. At that time, crime scene investigation was a sloppy affair, with evidence oftentimes overlooked or tampered with before it could be collected. Lee - who came from a wealthy family but was denied a college education because of her gender - co-opted the traditionally female art of dollhouse-making into a darker but more purposeful pursuit, building perfect freeze-frame replicas of real-life crime scenes - shell casings, butcher knives, blood spatters, and all - for training purposes. "The inspector may best examine [the nutshells] by imagining himself a trifle less than six inches tall," Lee wrote. "With that firmly in mind, a few moments of observation will then make him able to step into the scene and there find many tiny details that might otherwise escape notice." (6) Lee's nutshells are still used for training crime scene investigators today.

Others have followed in Lee's footsteps, adopting miniatures for purposes beyond that of playthings or collector's items. Some are educational, depicting historic events, while others are created to raise awareness about issues ranging from poverty to deforestation to isolation. Still others choose to use miniatures to present modern life in a microcosm - a city block, an office interior. The deliberate recreation of those otherwise ordinary scenes forces the viewer to reflect on his or her own daily comings and goings, turning even the mundane into something spectacular and worthy of attention. As artist Joe Fig writes: "Miniatures evoke a feeling of wonder or awe. ... They suspend reality, taking you out of your surroundings and bringing you into a new world."

As the world becomes a more complicated and chaotic place, the appeal of miniatures as a means of both escape and commentary will likely endure for years to come. 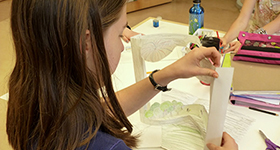 The Princes of Persuasion