The Permanent Way, Installation view.
x
July 1 is the sesquicentennial of the Pacific Railway Act, the federal legislation that enabled the development of the first transcontinental railroad. The law, in conjunction with the Homestead Act (passed just six weeks earlier), signaled the government's commitment to westward expansion even as the union itself was imperiled by civil war. It provided thirty-year government bonds and extensive land grants to the Union Pacific and Central Pacific railroad companies, which used these concessions to build over 1,700 miles of track. In May 1869, the two roads were joined at Promontory Summit, in the Utah Territory. Other transcontinentals followed soon thereafter.

Historians have long debated the economic and political value of these railroads. For Alfred Chandler, the growth of the railroad companies required an important "managerial revolution" that pointed the way to modern corporate capitalism. For Richard White, writing recently, the transcontinentals were thoughtlessly built ahead of demand, and the dramatic failures of these companies at the end of the nineteenth century unjustly imposed punitive costs on the public. All scholars of the railroads, however, agree that their amazing growth during the second half of the century fundamentally reshaped the American landscape. As White notes, "these railroads formed a lever that in less than a generation turned western North America on its axis so that what had largely moved north—south now moved east—west."

The shift wasn't only in the movement of goods, but also in the picture of America that its citizens carried in their minds. In recognition of the Pacific Railway Act's anniversary, The Permanent Way considers the centrality of railroads to Americans' understanding of the country's landscape. Today, trains are a "natural" component of that picture, as essential as broad, grassy plains and mountain peaks in the distance.

That we take trains for granted was not always the case. Cultural historian Leo Marx's important book The Machine In the Garden (1964) opens with the story of Nathaniel Hawthorne enjoying the tranquil environs of Sleepy Hollow, near Concord, Massachusetts, in 1844. Hawthorne's pastoral reverie is rudely interrupted:

But, hark! there is the whistle of the locomotive—the long shriek, harsh, above all other harshness, for the space of a mile cannot mollify it into harmony. It tells a story of busy men, citizens, from the hot street, who have come to spend a day in a country village, men of business; in short of all unquietness; and no wonder that it gives such a startling shriek, since it brings the noisy world into the midst of our slumberous peace.


The smoke-belching engines were an unfamiliar incursion, and Marx catalogues the affronted responses of numerous writers upset by the recognition that railroads would permanently alter their environment. Yet by the time of the Pacific Railway Act, just two decades later, the railroads had become an integral element of American life, for better and for worse. Time and space collapsed as people were able to travel further, faster, than ever before, and places without benefit of direct connection were woven together in a mesh of steel. The costs of such convenience, we now recognize, were enormous: the lives of the railroads' (often immigrant) construction crews; the livelihoods of those pushed aside by the entering wedge of westward expansion; the political ideals corrupted by back-room business negotiations; the savings erased when lines failed to materialize or collapsed. Yet there was no going back. In the eight years after the end of the Civil War, the mileage of operating railroad track more than doubled, to seventy thousand. As landscape writer John Stilgoe notes, "Emerson and his contemporaries knew the train and the railroad as novelties; subsequent generations were born into a world in which trains seemed as commonplace as spiderwebs."

Photography was itself a new invention in the second quarter of the nineteenth century, and as a technology it grew up alongside railroads—especially in America, where the first accurate representations of a given place were often made by photographers working on behalf of railroad expansion. Surveys of this vast, largely uncharted territory were commissioned by the government and by the railroad companies themselves, and sent photographers like A.J. Russell, Timothy O'Sullivan, and William Henry Jackson out into the field. Their images, widely distributed through government documents, news-media reproductions, and tourist publications, played an especially important role in refashioning the imagined American landscape.

This exhibition includes a small selection of such materials, encompassing railroad maps, lithographs taken from illustrated magazines, other prints, and turn-of-the-twentieth-century photo-postcards. From them, one can discover how quickly fresh observation gave way to visual convention. Axial views quickly become a stock-in-trade, whether depicting tracks receding to a single vanishing point in the distance or bisecting the frame parallel to the picture plane. So, too, one can repeatedly witness railroad engines, marvels of human ingenuity, overcoming adverse natural elements, as in the two nearly identical prints, from separate publications, depicting a train struggling through snowdrifts, its headlamp a beacon of progress.

Subsequent generations of photographers have walked the same trails, navigated the same canyons, forded the same rivers, and ascended to the same peaks as these men did during the "Era of Exploration." They have also responded to the visual tropes inherited from earlier eras. The artists included in this exhibition are not exclusively engaged with depicting railroads, or even solely concerned with the American landscape. Nonetheless, at various points in their careers each has found the railroads—or their ruins—a subject worth exploring.

Of the five artists included in this exhibition, Mark Ruwedel, based in southern California, is most closely identified with railroads. His series "Westward the Course of Empire" (1994-2007) documents with taxonomic precision the remains of North American lines. In a gesture reminiscent of the German photographers Bernd and Hilla Becher, Ruwedel exhibits small black-and-white photographs as grids arranged by type: trestle bridges, cuts through rock faces, tunnel mouths, paths through field and forest. The Bechers survey industrial plants, and Ruwedel's adoption of their signature technique highlights the "industrial" nature of even the most rural Western outpost. Despite focusing upon abandoned rail infrastructure, his lens necessarily captures evidence of the land's other uses, thereby demonstrating how the rails were but one human use of the landscape in an unending succession of uses. Even when the environment is seemingly pristine, as in the photographs by Jeff Brouws presented here, one can't help but be aware of human incursion, of the fact that human places are necessarily palimpsests. Best known for his photographs of the signs, buildings, and infrastructure of vernacular and decaying American landscapes, Brouws's images here are by contrast remarkably restrained. Working near his Dutchess County home in upstate New York, the artist sought out traces of the competing agricultural and dairy railroads that helped feed New York's hungry mouths and slake its thirst. The resultant works show no evidence of this bustling industry save for their pathways, the quiet negative space an inversion of the sites' former bustling activity.

The complexity depicted in these photographers' landscapes can have economic, social, political, and cultural manifestations. In many of her photographs, Victoria Sambunaris manages to reveal several such entanglements at once. She seeks "phenomena that are ubiquitous and familiar to a particular region but are anomalous to an ordinary eye," and often finds an elevated or distant vantage point from which to highlight incongruities. So it is with a photograph included in this exhibition. Untitled (VS-10-10), Train from Cristo Rey, Sunland Park, NM, from her ongoing series "The Border," depicts a rail line bending dramatically as it skirts the US-Mexico border. At this site, robbers from nearby Anapras, Mexico, had regularly thrown items onto the Union Pacific tracks to force the trains to stop, after which men would sieze the cargo and carry it directly across the border. The FBI organized a sting in 2000 that went awry, leaving two agents badly injured. The railroad still operates along this corridor, funneling millions of dollars worth of goods through dangerous borderland territory and highlighting, with each run, economic disparity and social tension.

Justine Kurland's images often feature people who have oriented their lives to particular places. They become, frequently by choice, socially marginalized, interacting as much with like-minded communities as with the broader population. In her recent series "This Train Is Bound for Glory," Kurland focuses upon the subculture of the nomadic hobo—as both romantic American myth and quotidian lived reality. In the unpopulated images from the series chosen for this exhibition, one can sense the landscape as these particular inhabitants view it, with trains accorded a central role.

James Welling's railroad photographs, made two decades ago, are but one facet of a prismatic career that encompasses abstractions, architectural photography, and experiments with the properties of the medium. In this exhibition they offer the closest look at the infrastructure of working railroads, and by extension the trains themselves. The engines move through a space that Stilgoe dubs the "metropolitan corridor" to indicate both its technological sophistication and its sense of in-betweenness and linkage. In Welling's documentary images, one can witness how the complexities described above are mirrored in an intricacy manifested along the route.

Permanent way is a term for the track on a railroad, from roadbed to rails. Here it is shorthand for the epochal shift these railroads caused in our picture of America. This exhibition commemorates the momentous decision, taken 150 years ago, to commit to the railroads' expansion, and reflects upon how even its greatest champions could not have predicted how transformative such a choice proved to be.

©2012 Brian Sholis
Brian Sholis is a PhD candidate in the department of history at the CUNY Graduate Center. From 2004 to 2009, he was an editor at Artforum, and is co-editor of an anthology of essays on art and American politics titled The Uncertain States of America Reader (Sternberg Press, 2006). He has written reviews and essays for numerous museum catalogs, artist monographs, and periodicals. 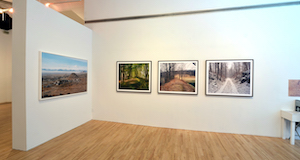