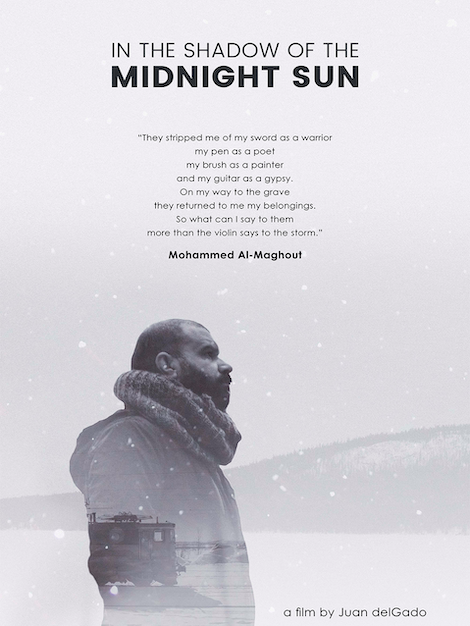 Juan delGado, In the Shadow of the Midnight Sun, 2020

In conjunction with Meteorological Mobilities

In the Shadow of the Midnight Sun is a creative documentary presented through the eyes of a Syrian refugee, displaced from his homeland and now traveling across the Arctic landscape as he tries to come to terms with his feelings of loss and emptiness in this unknown land. Whilst delving into the intimate story of a man displaced from his homeland, a country torn apart, the character is inquiring about the ecosystem we depend on and how it is increasingly fragile. In his journey, the character is trying to come to terms with his traumatic experience of loss and alienation, two things that are not apparent to the society he is struggling to fit into, whilst simultaneously unfolding a reality that affects us widely. The narrator’s reflections are interwoven with the seemingly disparate lives of those encounters on his journey: The Sami people who had lived in this territory for generations and now are undergoing their own experience of displacement due to the increasing mining industrialization and climate change in the region.

Excerpts of each episode are available to watch online:

The full film link will be available to access on Monday, July 13 at 6pm EST through Tuesday, July 14 at 11:59pm EST.