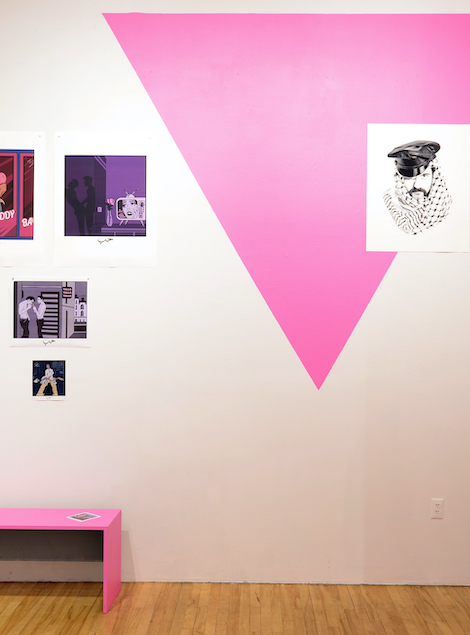 In conjunction with Queer-y-ing the Arab

A panel discussion to explore and queer-y Arab queerness. Moderated by curator of Queer-y-ing the Arab, the Earl of Bushwick and in partnership with ArteEast.

Panelists:
Dr. Andrew Gayed is an Egyptian-Canadian art historian and researcher interested in Middle Eastern contemporary art, queer theory, identity politics, and migration/diaspora studies. As a Visiting Scholar at NYU’s Centre for the Study of Gender and Sexuality, Gayed is currently working with Dr. Gayatri Gopinath on researching the artistic practices of the queer diaspora. Gayed holds a PhD in Art History and Visual Culture from York University where he was awarded the Provost Dissertation Award, and holds an M.A. in Art History, and a B.F.A. in Visual Arts.

Jamil Hellu is a visual artist whose work focuses on themes of identity representation and cultural heritage, addressing intersections between race, gender, and sexuality. Navigating from a personal lens, his practice weaves together photographic imagery, video, and installation to amplify queer histories and challenge the social construct of masculinity. Hellu is represented by Rebecca Camacho Presents in San Francisco and is a Photography Lecturer in the Department of Art & Art History at Stanford University. His projects have been discussed in publications such as The New York Times, The Guardian, The Advocate, and VICE.

Lara Nasser is a multidisciplinary artist from Lebanon. Nasser completed an MFA at the Pratt Institute in 2015. Since then he work has been included in international exhibitions at Beirut Contemporary Art Fair; Galerie Nikki Diana Marquardt, Paris; Takt Kunstprojecteraum, Berlin; Theodore:Art, New York; and the Condo Art Fair 2019, Athens; among many others. In 2018, she had her first solo show at Meredith Rosen Gallery, NY and had a second solo with the gallery in October of 2020. Nasser lives and works in Brooklyn.

The Earl of Bushwick is a playful artistic persona. As a non-binary queer Arab and immigrant, they are concerned with ideas of the Queer, the Other, and issues of not belonging, especially as it applies to art and class. Through their fluid night practice, they share and create safe spaces for identities and artists who do not fit or belong, as the Earl themselves spends their days operating as an orthopedic surgeon. Their home in Brooklyn, dubbed The Earl's Court (2015), is a long-running safe space and art project. They performed Bushwick Burqa at the Armory Show, New York in 2012 and 2013; presented Rent a Burqa at Bushwick Open Studios, Brooklyn, 2013; and they previously exhibited at the National Arts Club, New York, 2019.

ArteEast is a leading NY-based nonprofit dedicated to promoting contemporary arts of the Middle East and North Africa region, and its diasporas. Through public programming, strategic partnerships, and online platforms, ArteEast is a forum for critical dialogue and exchange.