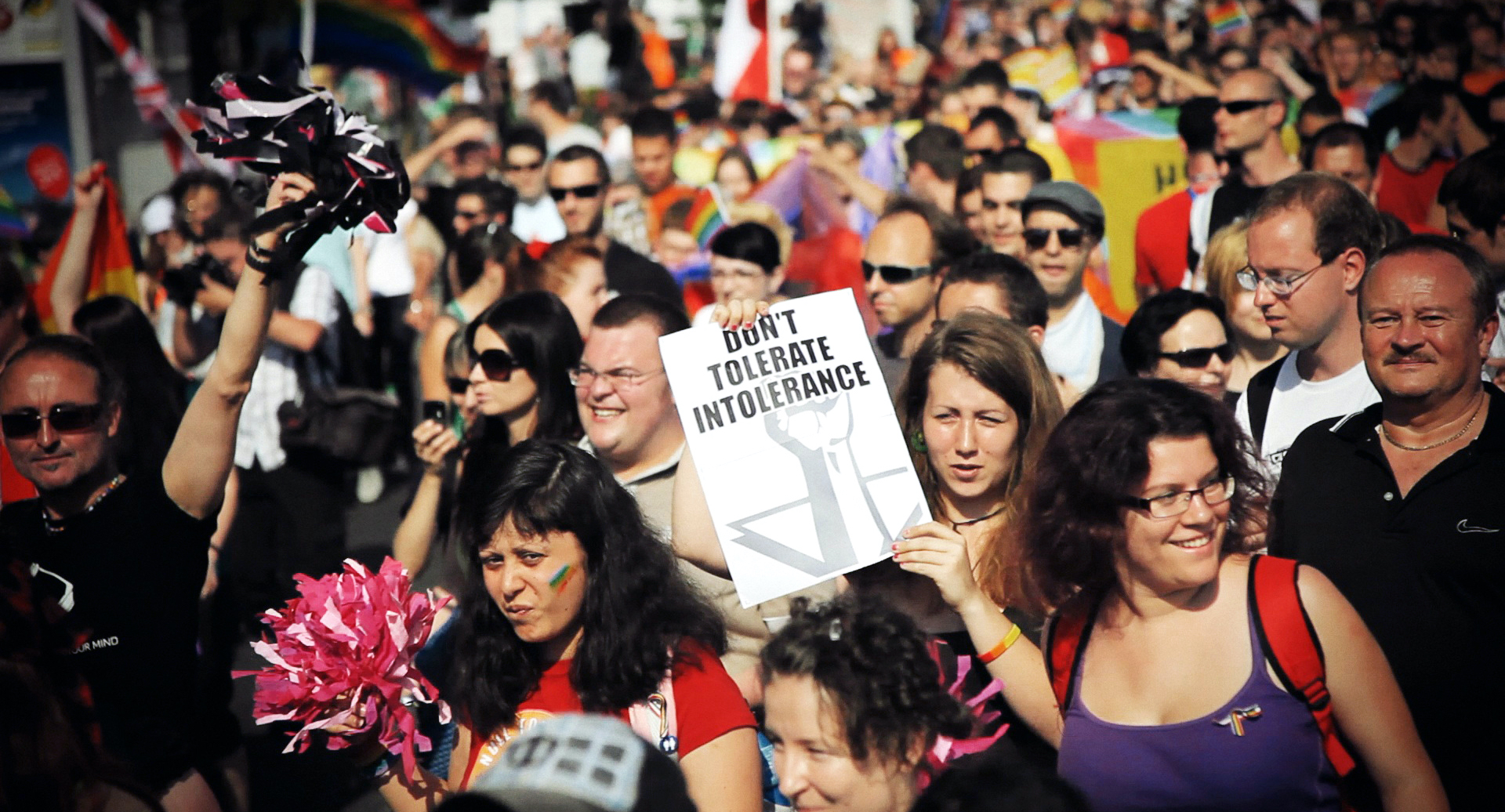 Tomás Rafa, New Nationalism in the Heart of Europe, 2009-2012
x
“Revolt against Reason!” stated Herbert Marcuse in his 1972 book Counter-Revolution and Revolt. Writing against the backdrop of the escalating Vietnam War, Marcuse judged that the conditions of twentieth century capitalism have so greatly changed from those of the previous century that a future revolution would require an expanded base, strategy, and direction. Such revolution would necessitate the rejection of “Reason.” Not just of the establishment, capitalism, and bourgeois society, but of Reason itself (in the Kantian sense)—and art, a sphere defined by its resistance to reality, he asserted, would be uniquely positioned to provoke the radical transformation of political thought and action.

At the onset of the twenty-first century, the complex relationship between creative practice and political activism has gained new critical relevance. The wave of Arab Spring revolutions and the growth of the global Occupy movements have ignited a reassessment of the intersection between art and politics—as evidenced by recent exhibitions including the 7th Berlin Biennale and dOCUMENTA (13). UNREST seeks a focused perspective; it reflects on the idea of experiential revolt within artistic practices that have emerged in the last decade. The exhibition presents eight contemporary artists who respond to recent historical changes by engaging with issues of resistance against conformist reason. At times this manifests itself as an instigative action, other times as a responsive gesture, and occasionally as an urgent awareness-raising exercise.

The Mumbai-based artist Shilpa Gupta, for instance, probes deep-seated issues of national identity and power politics in her new media work. Consider her sculptural sound piece, Tryst with Destiny (2007-08), a solitary microphone that broadcasts Gupta singing the historic speech delivered by Jawaharlal Nehru, the first Prime Minister of India, at the stroke of midnight on August 14, 1947, to celebrate the country’s independence from Britain. A printed version of the speech, reduced in font size to the point of illegibility, hangs next to it on the wall. Gupta’s deft oration touches on equality, prosperity, democracy, and freedom. Yet, her tone, wavering with each line, renders visible the distinctions between past promise and unresolved conflict, specifically as it relates to cultural divisions and the clashing of borders between India and Pakistan, issues that are still critical today.

Unfolding, in Marcusian terms, “an intelligence of opposition,” Moroccan artist mounir fatmi makes use of national emblems to subversive ends. His installation, G8-The Brooms (Contamination) (2008), is composed of twelve flags: the recognizable eight denote the countries that make up the G8 (a forum established in 1975 for the governments of the world’s largest economies), whereas the other four (all monochrome black) stand for anarchy. Propped up in a cluster against the wall, each flag—a sacred totem of authority—is buttressed by a push broom—a profane utensil of the working class. The flag/broom combination is a leitmotif in fatmi’s work, and sometimes implies a symbolic “cleaning up.” Here it acts as a poignant metaphor for the relationship between the 1 and 99%, as well as the forced semblance of its equilibrium.

How can a minority fight injustice? The Occupy movement, according to American philosopher Noam Chomsky, “is the first major public response to thirty years of class war.” It is a movement based on moral solidarity rather than political and economic rationality. Oscar William Sam (2012), a four-minute video by Kurdish/Turkish artist Ahmet Ö?üt, consists of a compilation of shots of the Occupy Wall Street camp in Zucotti Park (days before it was evicted by the NYPD Counterterrorism unit at 2 a.m. on November 15, 2011). In it, an anonymous finger points out individuals in the camp, calling them by the most popular first names in the United States. Throughout the video, both the identity and position of the protagonist remain unclear: is he an informant or a fellow occupier? The title, which refers to the supposed names of the squatters (all names are fictitious), also functions as an acronym for the Occupy Wall Street movement, and as abbreviations often deployed by law enforcement officials to single out individuals. Using the repetition of minimal actions—in this case, naming—Ö?üt identifies the movement’s power, i.e., its solidarity, its sense of belonging, and its espousal of being-together beyond a politics of identity.

Set against the background of political unrest, demonstrations, blockades, and scenes of everyday life, Slovakian artist Tomá? Rafa’s ongoing video project, New Nationalism in the Heart of Europe (2009-12), documents the fine line between patriotism and exalted nationalism, as well as the aggression instigated by racist actions and xenophobia. Besides recording anti-Fascist protests in the Czech Republic, and the Occupy movement in New York, Rafa has focused on pro-life rallies in Switzerland, LGBT marches in Poland, and displays of extremism elsewhere. How could protest movements and practices grounded in aesthetic experiments act as oppositional cultural forms and reshape social reality? Rafa suggests that the first steps would precisely entail the reversal of conformity, passivity, and acceptance of the established order (i.e., an order manifested in the one-dimensional language of the media and politicians).

The transformative tactics of “striking” are salient to the practice of Paris-based collective Claire Fontaine. Founded in 2004, Claire Fontaine, whose name is derived from a brand of French notebooks, describes herself as a “ready-made artist”—the equivalent of a urinal or Brillo box. Her neo-conceptual pieces provoke an ongoing interrogation of the political “impotence” of contemporary art. Claire Fontaine explores to what extent forms of cultural and social rebellion develop oppositional modes of acting that could subvert the one-dimensional society. In Fight Fire with Fire (2006), a sign made of cardboard and smoke, she implements the language, aesthetic, and “poor art” materials of protest. The text itself is lifted from placards carried by French youths of African and Maghrebian descent during the series of riots that took place in October and November of 2005 in Clichy-sous-Bois, a suburb of Paris. In the text, Human Strike Has Already Begun (2005), Claire Fontaine suggests that to break with the status quo one must engage in “human strike”—a revolt inspired by Italian feminist groups of the 1970s to counteract constricting social relations (i.e., housework, obligatory sex) endorsed by the dominant order.

The British artist Alexandre Singh approaches politics in a less overt, but equally effective manner. A Wikipediast philosopher, he is an inventor of new linkages, an author of a language of defiance. Weaving facts with fiction, as well as history with current events, he often makes use of word plays and non-linear, associative thinking. In one of his earliest works, The Economist (2006), Singh takes a political idea and transforms it into an intertextual hyperlink. He begins with the cover of an edition of The Economist—a publication that Singh remembers lying around his childhood home—to which he applies the anagram logic of the Kabbala to reveal the publication’s hidden messages. Singh is precisely the kind of artist that Marcuse envisaged when he said that art must discover “hidden and repressed truths,” in order to shape social reality, and produce “society [itself] as a work of art.”

In her work, Iranian-born Tala Madani explores the subversive, politically-inflected quality of satire. Humor is one of the most powerful forms of protest: it disrupts and reshapes the world as we know it. Appropriating the art of the trickster, Madani offers resistance to dominant ideologies. Her darkly playful scenarios feature Middle Eastern men playing out fictive and deviant rituals, which satirize the religious fundamentalism and sexism—especially machismo—still pervasive in contemporary society. For UNREST, Madani presents two works: Spiral Suicide (2012), a large diptych painting in which a generic man is caught in a vortex, spiraling to his self-inflicted death; and Music Man (2009), an accompanying animation in which a burly man tortures his captive by having him vomit repeatedly on a musical staff, an exercise that results in a silent score for the senseless brutality. Both pieces are pervaded by a sense of futility, made explicit through the circuitous iteration of graphic violence. Madani’s use of humor acts as a strategy of rupture that simultaneously liberates, questions, and reveals.

The revolutionary transformation of our increasingly stifled society and culture requires a nonconformist language. Egyptian artist Iman Issa’s work is grounded in the seditious use of traditional materials. In Colors, Lines, Numbers, Symbols, Shapes, and Images (2010), a set of four minimal posters conceived prior to Egypt’s uprising against long-standing autocrat Hosni Mubarak, Issa mines national symbols to probe their formal and conceptual codes. Based on the “political/election poster,” the series was designed at a moment when propagandistic symbols had been emptied of meanings, and revolutionary actions seemed unattainable. Stimulated by Issa’s memories of specific historical moments, events, places, and characters, each unique poster mediates the visual and written language of political iconography with the potential of emancipatory thought—the “what is” and “what could be.”

UNREST opens on the daybreak of the 11th anniversary of September 11th, and the one-year anniversary of the Occupy Wall Street movements. The motivation for this exhibition resides in the idea that art can produce revolutionary consciousness. Art best serves praxis in its own dimension, i.e., not by being a mere instrument of propaganda, but by critically engaging, subverting, opposing, and resisting the political establishment. When expressing a new language, art becomes a material source in social reconstruction. In other words, art has the agency to react to the deep crisis of democracy and transform the world. The artists in UNREST play an indispensable role in this context: by engaging with the Arab Spring revolutions, the Occupy movements, “human striking,” and other forms of protest as forms of “social sculpture,” they provide a new language of expression for the transformation of society itself. They thus engender a re-thinking of culture, a reawakening of engaged political thought, and a renewed state of UNREST.

Natalie Musteata is a Ph.D. student in Art History at The Graduate Center, CUNY, and an adjunct lecturer at Parsons, The New School, where she teachesPerformance and Participation in the 20th Century. Last year she presented a paper on artist-curated exhibitions at the conference The Now Museum: Contemporary Art, Curating Histories, Alternative Models at the New Museum, New York. Her most recent essay, "Performing Dissent: The Rhetoric of Opposition in Reenactment Performance," will be presented at CAA in February 2013. 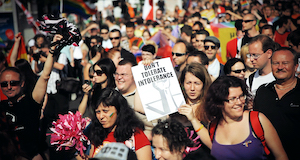 How Can Art Affect Political Change?