Change the Channel: WCVB-TV 1972—1982, Installation view.
x
On May 9, 1961 Newton Minow, the newly appointed chairman of the Federal Communications Commission, delivered a speech to the National Association of Broadcasters in Washington, D.C. that reflected the growing concern in America over the effects of television on the public. The speech, entitled Television and the Public Interest, called for an improvement to the quality of the programming, and defined broadcasting for the 'public interest' as television that has "a soul and a conscience, a burning desire to excel," and "build[s] the character, citizenship, and intellectual stature of the people." Minow criticized the broadcasters in the room for delivering to their viewers the same banal programs as their colleagues:


"I invite each of you to sit down in front of your television set when your station goes on the air and stay there, for a day, without a book, without a magazine, without a newspaper, without a profit and loss sheet or a rating book to distract you. Keep your eyes glued to that set until the station signs off. I can assure you that what you will observe is a vast wasteland."

His critique could have been directly aimed at the Boston Herald-Traveler Corporation (BHTC) who owned and operated
WHDH-TV Channel 5, Boston's local CBS affiliate. They were already a media giant—owning two daily papers and two radio
stations—when they were awarded a temporary(1) license to operate the channel in 1957, and they continued to use the network to promote their media empire: using their newspapers to promote their television and radio programs, and their television and radio programs to promote their newspapers.

Six years later BHTC's temporary license to operate Channel 5 expired. Boston Broadcasters Incorporated (BBI)—a collective of esteemed academics, local leaders, and professionals—filed a competing application to run the station, and began the largest, longest coup in FCC history. Their application immediately made it clear that the content of their station would be in the interest of the public:


"We do not regard the audience to be served simply an indiscriminate mass of viewers; nor do we believe that it is necessary to aim at a common denominator and especially the least common denominator… Rating services are of some help in ascertaining what services a station should render, but to know how many sets are tuned to a particular channel is not the same as knowing what those people… wish to watch."

Specifically, BBI promised to run less commercials; refuse paid political and religious advertisements; put profits back into the station; broadcast 24 hours a day, five days a week; make use of the educational, cultural, scientific, and entertainment resources in the region to produce more local, live programs; and to prioritize the airing of their programs over those of ABC, their network affiliate.

After a long, bitter legal battle with the Herald-Traveler Corporation BBI took over Channel 5, and greeted Boston for the first time on March 19, 1972. Viewers tuning into the fist broadcast were greeted with new call letters (WCVB-TV), a new logo, and this message:

"William James once wrote: ‘If things are ever to move upward someone must take the first step and assume the risk of it.' The men and women who comprise Boston Broadcasters Incorporated, and the management and staff of WCVB-TV, now take the first step on a journey in responsible broadcasting that has been nine and a half years in preparation."

In addition to those programs, this exhibition highlights the programming initiatives of Robert Gardner, a documentary filmmaker, director of BBI, and then director of Harvard's Carpenter Center for the Visual Arts. Gardner was responsible for the creation of Screening Room, a 90-minute late-night program that showcased and discussed the work of documentary and experimental filmmakers and animators like Stan Brakhage, Les Blank, John Whitney, Hilary Harris, Peter Hutton, and Jonas Mekas (to name a few). He also produced several films for WCVB-TV: Derek Lamb's Psychic Parrot (1977), a 30-minute short about a parrot that predicts the end of the world, Richard P. Rogers' Cost of Living (1979), a documentary that asks people from a range of economic communities to discuss the meaning of money, and Anthem, (also by Rogers) a 3-minute collage film of the American flag to serve as the station's sign-off. Gardner also created several ‘non-commercials': 60-second short films showing a member of the community at work which were inserted in random commercial breaks instead of advertisements. Also on view will be a realization of his proposal to broadcast the Bill of Rights, uninterrupted, for 24 hours during the US Bicentennial.

That these programs were ever produced and broadcast can be credited to visionary station manager Bob Bennett, hired because of his belief in locally relevant programming, and also that such programming could be profitable. It should be noted, that WCVB was not as focused on cultural, art, and educational content as WNET and WGBH, the leading public television stations of the time: amidst their exceptional local programming was a typical mix of soap operas, talk shows, sports, and prime-time series that could be found on any other network affiliate. However, after acknowledging that WCVB was, after all, a commercial television station "in the business of delivering large audiences to advertisers," Henry Becton, then general manager of WGBH called it the "best commercial television station in the country."(2)

On May 19, 1982, Metromedia, the nation's fourth-largest broadcaster, purchased WCVB for $220 million, then the largest sale of a network affiliate station. Bennett stayed on, as did much of the station's production team, and Channel 5 continued to broadcast its mix of locally-produced and network affiliated programs. However, as ownership changed hands — finally coming under control of the Hearst Corporation — BBI's mission slowly faded away. With the exception of a handful of news programs developed in late 1970s still on the air today, the caliber of programming on Channel 5 today has returned to what it was before 1972.

This exhibit's collection of original footage, press, and viewer correspondence encourages visitors not only to consider WCVBTV's impact from 1972-1982, but also to ponder the question, "how might this happen again?" Could the story of BBI's creation and dissemination of innovative programming inspire others in a position to impact an equally large audience?

1. In the 15 years they were on the air, BHTC never had a license to operate Channel 5 for longer than 4 months due to allegations of ex-parte contact between members of the FCC and the president of BHTC, and concerns over their media holdings. Writing in [MORE], a journalism review, Arnie Reisman said of WHDH: "no other company had operated a station, that it didn’t really own, for so long and lost it."
2. "Some Say This is America's Best TV Station," Tony Schwartz, New York Times (1981) 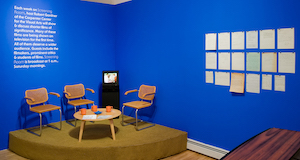