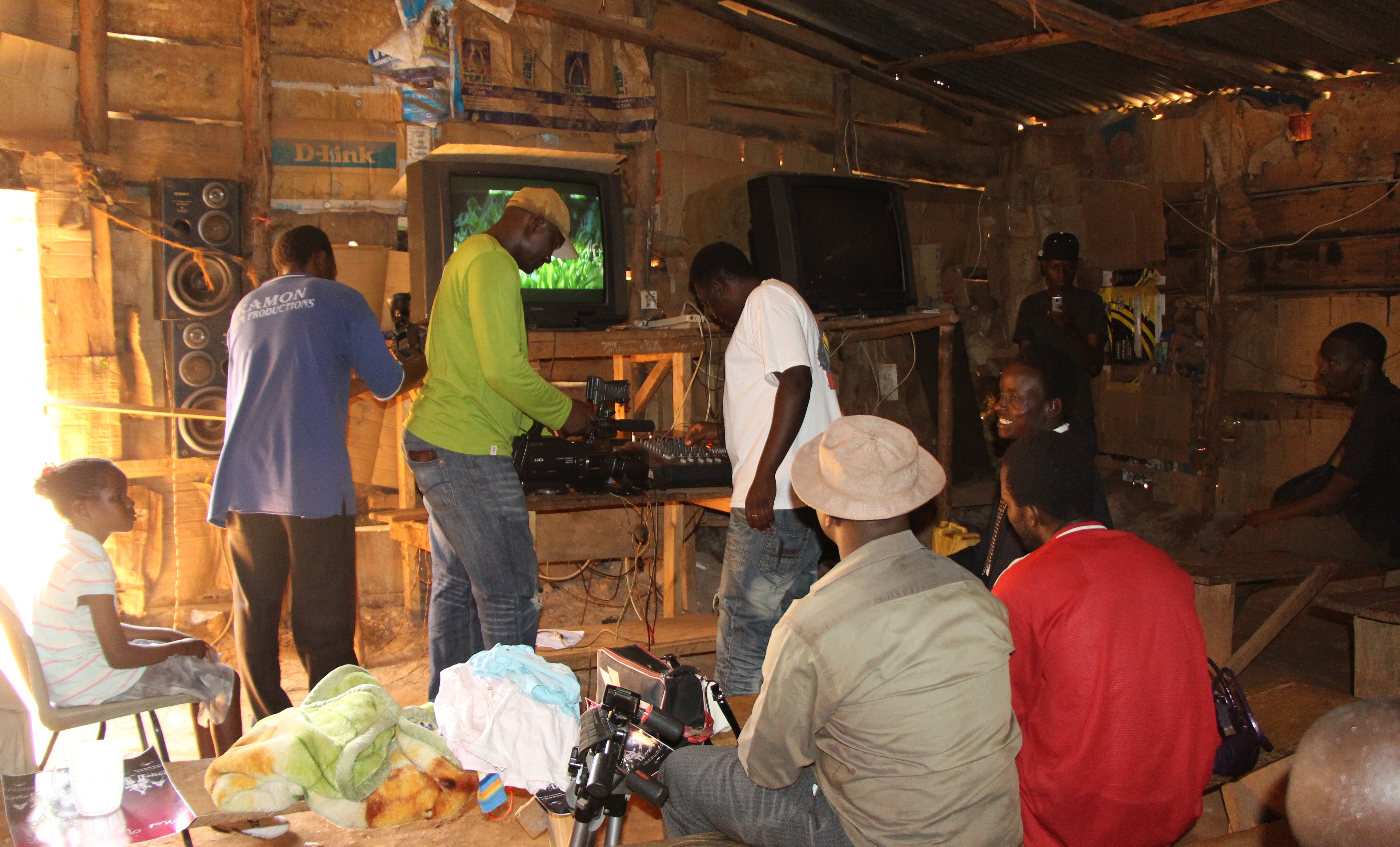 Video Slink Uganda, Installation view.
Video Slink Uganda is a multi-part project that explores the language of video, cultural translations and transpositions, as well as contemporary media distribution and reproduction. It consists of curated short-form experimental videos by contemporary African/African-American artists that will be shown and "performed" in the video halls of Uganda. Uganda's Black Market Cinema

Video Halls (or "bibanda") are often no more than small huts where viewers pay a few cents to watch pirated DVDs on diesel-powered television screens. In the majority of villages and towns, they are the only form of popular visual entertainment, reaching millions of Ugandans every month and hundreds of thousands each day—more than television and newspapers put together.

Local performer/pirates called VJs first translate the films into the primary local language of Luganda before burning them to DVD. Dubbing all the voices, making jokes, and explaining the on-screen action, these VJs then act as both interpreter and commentator.

Starting in 1986, the earliest of Ugandan black market videos were dubbed by VJs live in front of an audience. Live translations soon became recorded: the VJ would bring the DVD to be pirated to the recording studio. Using a remote control jerry-rigged with a wooden clothespin to keep the electrical circuit either open or closed, the VJ would mute the sound while he translated the voices. The earliest VJs would translate with an emphasis on description. Starting about 1998, VJs began increasing their interpretive and performative role, recognizing that their charisma drove up ticket sales. Like the carney barker or the MC, the VJ's talent lay in his ability to operate on a meta-level, acting as various characters but also in the inbetween.

Video Slink Uganda is a multi-part project of curated shortform experimental videos by contemporary African/African- American artists. For the exhibition in Uganda these experimental videos will be burned onto pirated DVDs that play before the main feature film in video halls. In keeping with local traditions of viewership, a handful of VJs translate these shorts before burning them onto commercially pirated DVDs.

None of the selected video shorts are documentaries, none are linear, and none rely on language as their primary mode of communication. Instead, they appropriate and subvert mainstream cinematic tropes, using repetition, simultaneity, and the compression of time and space as a way to question customary modes of perception.

By both transposing these works into a different cinematic culture and asking the VJs to translate these works into Luganda, Video Slink Uganda pronounces the asymmetry between not only image, sound, and language but between cultures. The selected videos are as follows:

Paul D. Miller a.k.a. Dj Spooky that Subliminal Kid
New York is Now (2006)
New York is Now, created by African-American artist, musician, and writer Paul D. Miller a.k.a. Dj Spooky that Subliminal Kid, portrays New York City at the edge of the recorded imagination. Composed of found footage appropriated from material as diverse as Duke Ellington's "Harlem Tone Poem," Hans Arp's "Rhythmus 21," Thomas Edison's vignettes of the electrification of Coney Island, and other archival bits and pieces from the 20th century, New York is Now emblemizes Miller's signature approach to remixing digital culture and the framework for Video Slink Uganda as a project: both are founded in a logic of disjunction, adjacency, and improvisation. In describing New York is Now, Miller refers to the science fiction writer William Gibson's notion that "the future is already here, it's just unevenly distributed." In foregrounding the coterminous relationship between technological distribution, wealth, and location, both Gibson's quote and Miller's work together highlight the way that cultural transposition mediates and renders visible these asymmetries.

Hank Willis Thomas and Terence Nance
Untitled (video short produced for Films4Peace) (2012)
An allegory about peace and reconciliation, this short video by African-American artists Hank Willis Thomas and Terence Nance depicts a group of male characters attempting to overpower elements in a forested landscape with brute force. The female characters, working in concert with each other and their surrounding natural elements (trees, rocks, earth, water, and light) together arrest the conflict and restore harmony.

Kamau Patton
Thresholds (2005)
Thresholds, created by African-American artist Kamau Patton, features an elaborately-decorated altar animated by firecrackers and split in half with the left and right sides of the screens mirroring each other. A masked character rings a hand-held bell as he slowly crouches out then in towards the center of the kaleidoscope-void, where digital decay, dissolution, and dissonance play against ritual, archetype, and the promise of origination.

Zina Saro-Wiwa
Phyllis (2010)
Directed by British Nigerian filmmaker and video artist, Zina Saro-Wiwa, Phyllis is an example of what Saro-Wiwa has termed "alt-Nollywood." The film features a Nigerian woman obsessed with Nollywood films and wig-wearing. Each wig she dons triggers a soundtrack that masks her otherwise solitary and stark quotidian life to which she returns when she removes her wig. Phyllis, it transpires, is a psychic vampire, a representation of the subcutaneous desperation apparent within urban Nigerian life. Phyllis is also a commentary on what Saro-Wiwa refers to as the unforgiving treatment of single women in Nollywood and Nigeria, while also pointing out the way in which the derivative itself functions as a form of currency and stability.

Rashaad Newsome
Grand Duchess of Gainesville (2011)
African-American artist Rashaad Newsome's work samples motifs from aristocratic, hip-hop, and pop culture to create a new iconography that merges coats of honor with car rims, fake Rolex watches, and cruise ships. In merging "old bling" and "new bling," Newsome's work draws attention to the pervasiveness of heraldry in both high and low culture whose pedigree is maintained through jousting, battling, remixing, and appropriation. Produced by Newsome and set to original music composed by the artist, Grand Duchess of Gainesville is part of an ongoing project called "Swag the Mixtape," in which the artist collaborates with sound and recording artists.

The Felicities of Mistranslation and Infidelities

Contracts penned between Western art and media agencies (museums, galleries, producers) and artists typically outline the distribution, reproduction, and profits of the work. In doing so, a certain stability is ensured; this system of exclusion in fact produces what Jacques Derrida refers to as the 'bastard': "Bastards appear and (disappear) to enact impropriety. Accordingly, the bastard might be named 'impropriety itself' [...] Bastards, however, cannot be named properly and the one thing impropriety cannot be is one thing."

By comparison, cultures built upon a largely informal or blackmarket economy thrive on piracy and derivation as an inevitable force with its own set of tacit rules. Here, the illegitimate (the bastard) is not disavowed. Instead, the copy, bootleg, or knockoff becomes the currency itself, and increasing degrees of degradation, remove, or infidelity in fact heighten the work's authenticity.

Video Slink Uganda, then, operates between formal and informal (blackmarket) economies. Its role in negotiating these two regimes of control is underscored by a contract that both allows participating artists to subject their work to various options and pronounces the consequences of working with the black market. For example, while standard art and media contracts name who will commercially profit from the sales and reproduction of these works, Video Slink Uganda offers an alternative:

While the Organizers of Video Slink Uganda agree to not commercially profit from these works, we guarantee that others will—in fact, several times over on the blackmarket. It is possible and even likely that my work will be translated, mistranslated, misquoted, misunderstood, mistreated, mocked, pirated, duplicated, derided, sold on dusty streets and crowded markets.

Another section inverts the contractual agreement between museums and galleries to "return the artwork undamaged." However, the organizers of Video Slink Uganda promise to return the damage—those "artifacts of mistranslations, the bits that are dubbed, doubled, and born anew." Further, the contract stipulates that "The Organizers agree to submit to the Artist a Damage Report which will be provided to the Artist, as well as to the general public." In yielding to the interpretive context of Ugandan blackmarket cinema, these works, then, evidence the decay/degradation inherent in cultural transposition. Further still, the Video Slink Uganda project as a whole serves as an agent of the (de/re)generative process by which these works become Other.


Marisa Jahn is an artist/writer/curator/activist and and the co-founder of REV-, a New York City-based non-profit organization that furthers socially-engaged art, design, and pedagogy. She was a 2007-9 artist-in-residence at MIT's Media Lab and the editor of three books about culture and politics—Pro+agonist: The Art of Opposition (2012), Byproduct: on the Excess of Embedded Art Practices (2011), and Recipes for an Encounter (2010).

Paul Falzone is an activist, media scholar, and filmmaker whose work has appeared in a wide variety of conferences, publications and film festivals. He earned his PhD from the Annenberg School for Communication at the University of Pennsylvania and is currently Director of Peripheral Vision International, a nonprofit organization that produces and distributes advocacy media in East Africa.