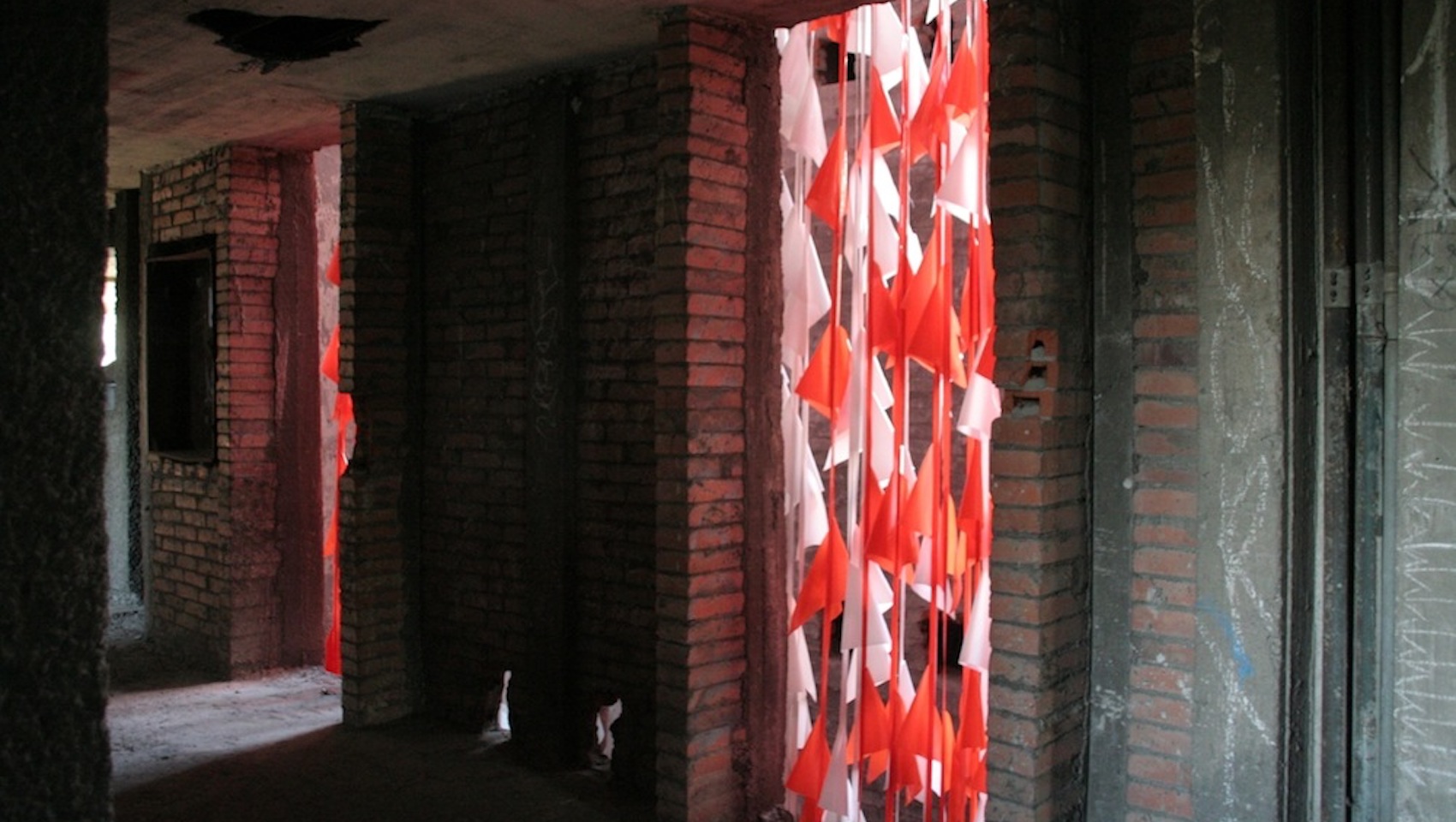 Ale de la Puente, espacio (en...), 2012, Installation, elevator shaft
x
Skin feels the heat from millions of exhaust pipes, dust specks whirl from the passing wheels onto cheeks, ears hear the faint music from some car radio and shouts from the streets, cars are beeping and the engines of trucks and helicopters hum, the smell of cigarette smoke mixes with burnt fat and pollution, and the tongue tastes the dry evening air.

We are walking next to thePeriferico ring road, an immense two-level highway roaring with traffic. It leads us to what will be a 5.3km stretch of steel and concrete, the Supervia Sur-Poniente highway, Mexico City's recent urban highway project, currently under construction. The road will split the neighborhood of San Jeronimo in half, turning what is a tree-lined avenue into a high-speed expressway. From here it will cut its way through the dense traditional pueblo of La Malinche, a large section of which has already been demolished, causing the displacement of hundreds of inhabitants, before reaching La Loma, an environmentally protected park.

Then the road will turn into two tunnels, digging through the hill to emerge on the other side, and crossing over Avenida Las Torres. Finally, tracing its bold line on the landscape as it bridges the gorges of the large Barranca Tarango protected natural area, it will arrive at the high-income residential and financial district of Santa Fe, resting upon the remote hills of the South West edge of the city.

The Supervia Sur-Poniente highway provides the setting of the exhibition Flesh & Concrete and explores the impact of this new highway not just as a means of transportation, but also as a symbol of progress and modernity — a tool for demonstrating political will and financial capacity. The Supervia is just one of so many infrastructure mega-projects built the world over, as cities compete with one another over the length of their bridges, the height of their skyscrapers, the popularity of their biennials, and the capacity of their fiber-optics in a relentlessly repeated cycle of competitive modernization. It is an inexorable global process presented as being necessary for the survival and prosperity of the general population of each city, while in every instance serving the interests of specific political and financial actors. The exhibitions title, Flesh & Concrete, refers to an ambition to awaken a bodily and material awareness of the consequences of these projects, to reach the concrete reality beneath their glossy promotional images. It refers to the effects of the highway construction as felt on the ground by sensing bodies — the urban body, as well as the body of every one of the people inhabiting this concrete landscape.

The Supervia construction project aims to solve the congestion problems in the area of Santa Fe, where people queue in their cars for hours a day, driving to and from the offices of this relatively recent global financial zone. While there is broad agreement about the traffic problems of the area, local residents as well as academics, journalists, and activists are protesting the highway as an inefficient and short-term solution to the traffic issues, built at a financial loss to the public sector. It will also exacerbate the already immense environmental problems of the city and deepen issues of inequality regarding mobility, access to a clean and safe environment, and the ability of inhabitants to determine the future priorities and conditions of where they live. The road will be tolled, excluding those who cannot afford it. It will intensify a condition of segregation in this city where the wealthy are isolated from the poor even when traversing the city space, avoiding public transport and moving from one securitized enclave to the other in cars and roads that are unavailable to the rest of the population.

From the roof of a semi-demolished house in La Malinche on the western side of Mexico City, one can see a dense and lively neighborhood to one side and on the other a vast stretch of rubble, remnants from some hundreds of houses that have been demolished for the highway construction. In the distance, two gaping holes in the green hill of La Loma that will become the Supervia tunnels. Marking the border between the still-inhabited neighborhood and the construction site is a three-meter-high double steel fence with barbed wire. Next to the fence, nestled between the remains of some housing blocks, a protest camp has been organizing against the highway construction for more than two years now. Lack of clear information about the route and schedule of the construction, as well as unequal and non-transparent compensation for houses that have been demolished have characterized the process with stories of night-time raids to fence off areas for demolition. Some people have been paid to demolish their own houses while their neighbors have blocked access to heavy machinery and received threats if they didn't comply.

The Flesh & Concrete exhibition sits between two rivers: a river of traffic and a river of water. Erick Diego has recorded these two sounds for his installation, the gushing of water referring to the vast lakes that used to make up this landscape before they were filled to make space for the city, and the sounds of engines on the contemporary rivers of roads, many of which have been paved on top of the ancient waterways. Francisco Ugarte has taken up an entire floor of the abandoned high-rise that is the site of the exhibition, immersing the viewer's body in his installation of smoke and lights obscuring clear vision. The work by David Cruz brings the material consequences of the urban condition — the thirst for water, the heat, pollution, and dust — to bear on the single body of the subject in his film installation. Diana Quintero instead reminds the audience of the bodies of those whose homes have been demolished in the nearby La Malinche, presenting a moving installation of birds and imagery. Ale de la Puente's work contains accumulated materials from construction sites that signify the sale of land and the incomplete, contradictory, and false information that has characterised the construction of the Supervia.

Since its initial conception in the 1990s, many people have been working hard to stop the construction of the Supervia, each contributing from their specific area of knowledge: local residents, urbanists, biologists, journalists, activists, engineers, traffic experts, economists, bloggers and artists. The role of art within this tense, politicized context is not an easy one. It must negotiate the pitfalls of exploiting explosive conditions for aesthetic purposes, or becoming a mere illustration of some political dogma, or simply being ignorant of the context and conditions it is operating within. The approach of this exhibition has been to seek out and speak to as many people as possible who are involved in the conflict in order to get a broad and deep understanding of the stakes involved and of how the exhibition might offer a different but complementary intervention into the struggle over priorities in urban development. This is an current conflict with a clear impact on the future of the city, and a neutral position is impossible. The contributions of the artists are each grounded in specific aspects of the consequences of the Supervia, not to explain these — we have text for that — but to offer a bodily experience and a subjective perspective on this urban experience. These changes to our environments are real, irreversible, and have a material effect on our bodies and surroundings that will last for generations. Looking out from the abandoned high-rise where the exhibition is held, with the noise from the roaring Periferico surrounding us, we can see the beginning of the Supervia construction and the end of life as it was.

Jaya Klara Brekke is an independent cultural producer, writer, graphic designer, and project manager for new media technology company BLIP in London. She is interested in theory and practice regarding urban space, technology, infrastructure, and the violent transformation of governance currently taking place in these fields under the guise of the financial crisis. Jaya is based in London, although increasingly in Mexico. http://jaya-klara-brekke.net 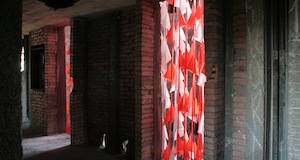