In Vitro (Studies On Entropy) 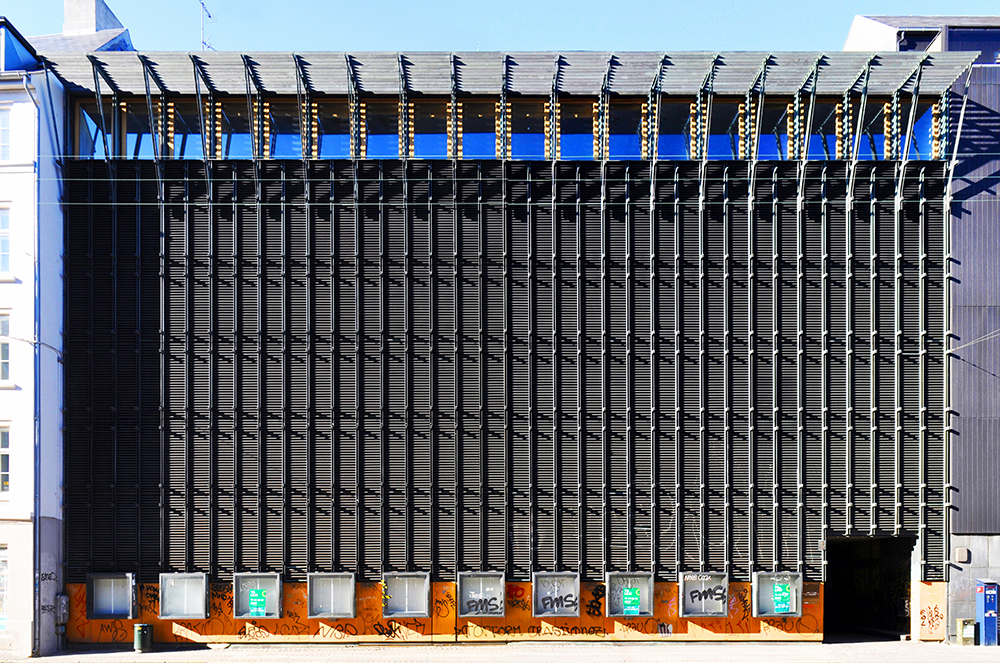 image by SEIER+SEIER
x
Situated in the heart of the commercial center of Copenhagen lies an uninhabited power transformer station. Located on the primary facade, facing one of the largest department stores in the city, ten 1960s modernist vitrines have been neglected and left vacant. Once used to display products from the nearby shops, the distinctive and unusual vitrines in copper and glass have now been empty for years. As outdated pieces of urban furniture they bear witness to the digitalization of the urban environment where LED screens have replaced the static billboards and physical display of objects. In their abandonment they become markers of urban entropy, physical ruins of an old economy decomposing in a new landscape of consumption. In Vitro (studies on entropy) is a pop-up exhibition investigating the term entropy and its relation to contemporary society. By using the Latin term in vitro (in glass) we draw a parallel to the world of scientific research and refer to studies of biological properties which are subject to test tube experiments (i.e., under glass).

For this apexart Franchise Exhibition, the Copenhagen vitrines are turned into local laboratories for the study of entropy in materiality, nature, and discourse. The American artist Robert Smithson appropriated the term entropy in the 1960s from the world of natural science and brought it into the field of artistic research. Much of Smithson’s output was shaped by his interest in the concept of entropy, the second law of thermodynamics that predicts the eventual exhaustion and collapse of any given system. In his famous essay “Entropy and the New Monuments“ (1966),1 he draws analogies between rock quarries and the strip malls and tract housing of New Jersey, suggesting that ultimately they will perish and return to rubble.

But the idea of entropy can also inform an outlook on culture and civilization more generally and can be applied to almost everything from tiny particles to the dynamics of human interactions. Some have argued that the whole energy crisis is a form of entropy: the earth is a closed system with finite resources, despite any attempts to reverse its inevitable destruction. The world’s population is concentrated in urban areas that grow larger every day, and the expansion and restructuring of these urban areas has tremendous implications for the lives of most of us and for the future of our civilization. The explosive rate of urban sprawl may threaten the ecosystems surrounding cities that are often crucial for the quality of life of city inhabitants.

Being in a state of urban entropy themselves, the vitrines function as a conceptual and physical framework for the exploration of themes related to entropy such as the tension between structure and disintegration, as well as different time-based experiments during the exhibition period. For In Vitro, the invited artists each represent forms of intellectual and imaginative inquiry where research is carried out in different ways and through a variety of media. They have all engaged with the idea of the entropic, creating site-specific works for the vitrines - works which are in danger of weathering away if rain and wind penetrate the seemingly robust, yet still old vitrines.

Showing preference for humble materials generally issuing from his everyday life, the French artist Michel Blazy shows an interest in uncontrolled and process-based projects that underline the passing of time. Through simple experiments, he transforms matter and allows hazard and unpredictability to take its course. For In Vitro he transforms everyday objects such as drinking glasses into crystalized sculptures during the exhibition period. By adding a simple liquid mixture to the objects, Blazy introduces the first impulse but then lets entropy take over as the piece evolves and transforms during the space-and-time of the show.

Changeability also plays an essential part in the work of American artist David Horvitz. Whether through books, mail, email, the Internet, clocks, telegrams, Twitter, or Wikipedia, his work reflects upon and interferes with systems of circulation, adapting them to unexpected purposes. His interest lies in the entropy of communication, of messages and information that turn to language, or images. Through the distribution of such different objects as letters and poppy seeds, he investigates the message in motion, what happens to it when it is passed on, where it goes, and how its language transforms in passing from one place to the next. For the work A proposal for a forest Horvitz has collected hundreds of seeds from nearby parks and forests and placed them in dirt and water. In his work Horvitz relates entropy to thinking about cities in a continuous back-and-forth confrontation with “natural” processes and links the concept to ideas of ecological succession, the process of change in the species structure of an ecological community over time. By planting A proposal for a forest, Horvitz proposes a possible future where plants would slowly regain control of the land, and over time a forest may return in the city.

David Stjernholm also plays with ideas of transformation. In an ongoing investigation on how the meaning of things change through their physical transformation, he engages with the constant flux of contemporaneity. By posing questions instead of giving answers he often converses with people from the world of science and other non-artistic fields. Stjernholm shows a common interest in the Antropocene - how human presence affects the surrounding environment - and his methods align with the way many crafts, disciplines, and professions are performed today: in front of a computer. This fact has been particularly motivating for his recent work initiating studies of digital media’s impact on the human body and mind, especially how the light that comes from computers, tablets, and phones impact us physically as well as mentally. He explores the world of digital decay or entropy and the paradox of the digital as being a place for the preservation of a limitless amount of images and information as well as the preservation of this material as a major profit center for the computer industry when they force us to buy the next upgrade. For In Vitro Stjernholm has focused on how easily we forget the kind of physicality that enables the transport of digital data. Seemingly bodiless, this physical structure is actually in danger of leaking and being destroyed just as information can leak due to human action or error. The work consists of thick fiber optic cables transporting light from a hidden screen simulator. The light is dispersed through the cables and exits as small images in a very low resolution.

The Danish artist Nanna Abell explores the continuously shifting relationship between material and meaning. In her work, mundane and exclusive objects appear in odd combinations that undermine common associations and transgress divisions such as high/low, surface/depth, abstract/carnal, or physical/mental. Instead, the materials and our associations are shaped within the sculptural constellation. For In Vitro, a stretchy bikini acts as bonding agent between other objects in the vitrine. A tangible new materiality is introduced with silicone glue colored red with cochineal bugs (which is normally a colorant in cosmetics). The same colorant appears on the billboards facing the vitrine from across the street with giant mouths, lips, and lipsticks. Yet, whatever dynamic and transformative potential the color and make-up once had, its efficiency seems lost when it is used to run the engine of static billboards. Thus the vitrine becomes an experiment exploring the artistic act and materialization as an intruding and on-going intervention, re-articulation and differentiation of an enclosed, energetically reduced system.

Centering her recent practice on questions concerning looping, echoing, translation, migration, bootlegging, dematerialization, and palimpsest, the French artist Félicia Atkinson turns two of the vitrines into a diptych with the questioning title A COME BACK? In the first vitrine she presents us with a series of small figurines of Danish Vikings crafted in teak and originating from the 1960s. These figurines are sold today as collectables mainly in Europe and America. For In Vitro Atkinson’s mission has been to buy a series of Vikings online and send them back to Denmark, returning the souvenirs to their country of origin. In the second vitrine, she adds sound and a small abstract painting which zooms in on the characters using found pieces of wood, brown, leather, and fur to match the colors and appearance of the Vikings. Most of all the painting looks like an unfinished work, an awkward decorative item where elements are missing. A palette for another painting, a vacated decorative theatre set, or an abandoned piece of land. Accompanied by a blend of sounds recorded while Atkinson was traveling in Denmark and in United States, the vitrine revisits the figurines by distorting the consumer objects into abstract image and sound adding another time and experience to objects that are emotionally and historically charged.

For their site-specific project, the Danish duo Mathias & Mathias has been inspired by ornament and allegory. Using the full space of the vitrine, their piece Ship of Fools takes on a three-dimensional character creating a theater-like scene. The style is inspired by the kind of aesthetics one finds in public institutions: trashy, simple shapes, and saturated colors. The background consists of a silk-screen print of a hand-drawn running dog, a classic ornament in art history dating back to pre-antiquity, but in this case also a 1:1 copy of a wall decoration from Horsens State Prison, a now defunct institution in Denmark. Resembling a wave, the background alludes to an ocean on which Mathias & Mathias placed a paper maché ship. The title of the work refers to an allegory originating from Plato, which depicts a vessel without a pilot, populated by human inhabitants who are deranged, frivolous, or oblivious, and seemingly ignorant of their course. For Plato the ship represented democracy, but throughout the Renaissance the ship gained a more contemporary character as it became common practice to send the deranged and mentally ill out to sea as a cure for mental sickness and as a way to maintain normative culture in society. It was a way to dispose of the confusing, disturbing, and uncontrollable entropic elements in society.

With the title Irm Hermann, Beverly Hills the Danish artist Martin Erik Andersen refers to the cinema of Rainer Werner Fassbinder, whose sensibility for the dysfunctional elements of the urbane inspired the artist. He also creates a connection to another nearby vitrine, which for a long time has showed nothing but a collapsed poster only leaving visible the name Beverly Hills in pink letters. Martin Erik Andersen sees the urban as a network of functionalities with different rhythms, layers, and times. As is the case with the abandoned vitrines, some of these functionalities become dysfunctional over time and take on a new position. And by their mere emptiness and lack of function they start questioning the efficiency of the urban system, one that, in the case of Copenhagen, is based on a small but highly efficient rationality that leaves little room for the dysfunctional.

As a frame for contemporary art, the vitrines become a meta-commentary on the status of the dysfunctional in the post-industrial city of Copenhagen since visual art has always existed in a limbo between aesthetic value and dysfunctional trash. At the same time public, but today unnoticeable, the vitrines exist as empty visual platforms, whose functionality has collapsed and been relocated to the world of digital billboards. All that is left is a questioning physical emptiness, a collapsed Beverly Hills, as Martin Erik Andersen suggests.

Peter Amby and Marie Nipper © 2015
Peter Amby is the co-owner of the Copenhagen-based gallery Last Resort, which focuses on young international contemporary art from his own generation. Previous to Last Resort he has been involved in several gallery setups including his own Peter Amby Gallery as well working as a curator and art consultant.

Marie Nipperis senior curator at Tate Liverpool, previously Chief Curator at ARoS Art Museum. She has realized a row of major commissions and international exhibitions, including solo and group shows with some of the most renowned contemporary artists today.