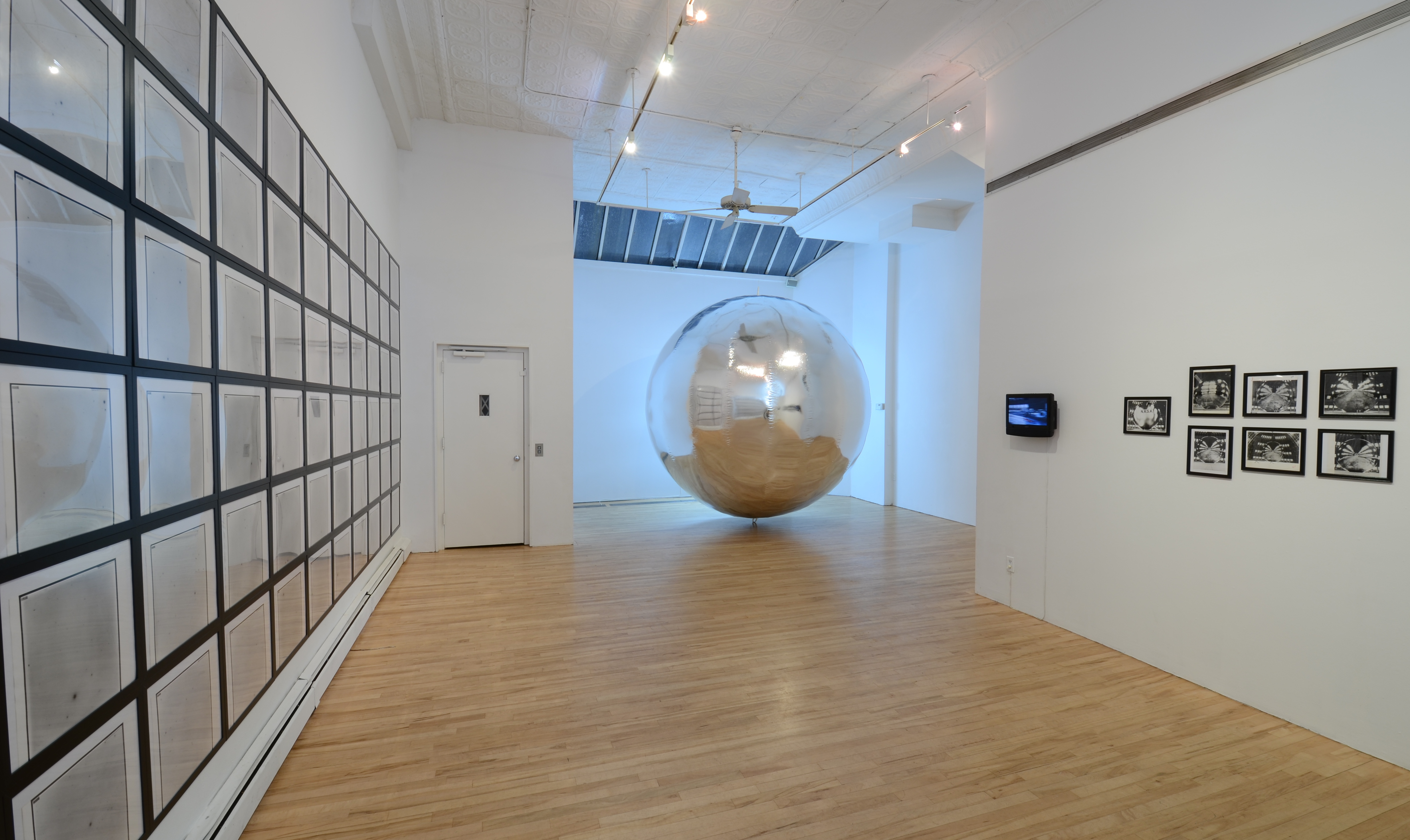 Exhibition Space, installation view.
x
A consideration of one object and two seemingly unrelated series of photographs from the early days of the Space Race reveals a sudden transition in mankind’s perception of outer space. In an ambitious photographic sky survey, the universe is a subject of de-aestheticized, scientific, earthbound observation. But as the launch of Sputnik heightened the Cold War’s contentious dynamic, the U.S.’ aggressive and highly visual response transformed space into a site of military, political, and cultural activity—with ourselves as the subject.
National Geographic Society - Palomar Observatory Sky Survey

On January 20th, 1949, six days before the Palomar Observatory's 200-inch telescope went into operation, astronomer Edwin Hubble and Caltech administrator G.H. Hall discussed the creation of a sky atlas, a complete photographic survey of the sky, which scientists would use to identify potential targets for observation.(1) The National Geographic Society agreed to underwrite the project, which was projected to take four years. It took nearly nine. To make the NGS-Palomar Observatory Sky Survey (POSS), the universe (or the northern three quarters of it visible from California, from 90 to -45 degrees latitude) was gridded into 6-degree sections and photographed in two wavelengths, red and blue, using Palomar's 48-inch Oschin Schmidt telescope. Rudolf Minkowski, a German refugee astronomer who fled Nazi persecution in the late 1930s, oversaw the POSS, taking and inspecting every one of the 1,620 exposed pairs of glass plates required to obtain 935 acceptable pairs in the final Survey.

The POSS plates are among the most technically and conceptually sophisticated photographs ever made. Prolonged exposure meant they were able to capture objects one million times fainter than the limits of human vision. The resolution of the Survey was ultimately determined by the plates’ photographic emulsion, a hypersensitive spectroscopic formulation developed in consultation with Kodak.

According to Dr. Minkowski, “No known reproduction method can reproduce on paper the full density range obtained on a photographic plate.”(2) To minimize loss from generations of photo reproduction, glass contact positives were produced for each plate, which were used to print complete sets of contact negatives. These black-on-white negatives also turned out to be more easily legible for humans. The NGS Palomar Sky Atlas was available in glass or paper editions for around $40,000, and it became an indispensible reference for astronomical observers worldwide, as well as a primary research tool in its own right, for over thirty years.

But the advent of digitized surveys; the discovery of non-optical spectra such as gamma rays and X-rays; and the expansion of space-based observation platforms have rendered analogue photographic prints like the NGS-POSS scientifically obsolete.

Project Echo
At the same moment Palomar’s astronomers were looking at the sky with confident anticipation, ready to discover its mysteries, rocket scientists and their political patrons were freaking out. It is difficult to overstate the anxiety that swept the American political, military, and media establishment following the surprise announcement of Sputnik on Friday, October 4, 1957. A dinner guest at Lyndon Johnson’s Texas ranch that night recalled the troubled senator looking up at the sky, saying “In the Open West, you learn to live closely with the sky. It is a part of your life. But now, somehow, in some new way, the sky seems almost alien.”(3)

L.B.J. would soon call Sputnik “a second Pearl Harbor,” and he convened months of congressional hearings into the apparently hapless state of U.S. space policy. It was at one such House hearing in April 1958 on the creation of a National Aeronautics and Space Agency that William J. O’Sullivan, an engineer at the government’s Langley Research Center in Hampton, Virginia, inflated a 12-foot Beacon satellite in the U.S. Capitol,(4) and promised that, given the chance, a NASA team could quickly build and launch one just like it, only it’d be “at least ten stories high.”(5)

O’Sullivan rankled colleagues by claiming to have come up with the satelloon concept himself, when his real genius was being in the right, politically charged place at the right, affirmation-craving time. Echo can be seen as the synthesis of at least two separate proposals that had been circulating within the field for several years. Communications satellite pioneer and Bell Labs executive Dr. John R. Pierce had published satelloon feasibility analyses in science journals in 1955-56. And three years before that, Manhattan Project physicist Dr. Aristid Grosse and reformed Nazi rocket scientist Wernher Von Braun had evangelized widely for the immediate launch of a 100-foot, white, plastic, balloon satellite which would, through its awe-inspiring presence alone, basically win the Cold War for America:

"The sole purpose of the vehicle would be to be seen. To be seen by 400 million Chinese, 200 million Russians, 400 million Indians etc.! 'The American Star, rising in the West and setting in the East.' Father would show it to son, and the priests would be asked, too. It would be punctual and predictable like a clock. Don't you think that this would do more for the Western cause in the Asiatic mind than the Korean War, the existence of the A-bomb, or the 'Voice of America'?"(6) [italics original]

Echo IA’s deployment was a proud moment for the team at Langley Research Center, where engineers had been working on an inflatable satellite for almost four years. They began with a 30-inch model. Then came the 12-foot diameter version, the Beacon, whose size had been determined by the ceiling height of the Langley workshop, but whose major success was as an earthbound prop. None of the test flights of these models was successful. When the first 100-foot diameter satelloon Echo I exploded soon after its October 1959 launch, it rained “thousands of fragments of the aluminum-covered balloon” through the sky, creating a 10-minute light show all along the East Coast.(7) Patriotic reporters helped NASA hide the failure with headlines like, "Earthlings Stirred by NASA Balloon, Awesome Sight in the Sky."(8)

In the spring of 1960, engineers from GT Schjeldahl, the Minnesota-based contractor for Echo IA, conducted an inflation test in a World War II-era dirigible hangar in Weeksville, North Carolina. The orbiting satelloon’s primary purpose was to be easily visible around the world to the naked eye, but NASA did not want anyone to miss Echo’s awesome presence on the ground, either. The large NASA banner suspended in the vast space indicates that the satelloon was there not just to be tested, but to be photographed. In the Weeksville pictures, Echo at first seems like a classic example of the early Space Age satellite vernacular: minimalist, spherical, and metallic. Then one notices the photos’ contextual details--the hangar doors and girders; a parked truck; and, most remarkably, two men, one seated on a folding chair, just looking at the thing--which reveal Echo’s almost comically immense scale. Echo’s size matters not just for its image--its iconic presence on earth as well as its visibility in the heavens. It also accords with the United States’ new, official predisposition to view space as a site for asserting its political, military, and cultural dominance. Echo was a funhouse-mirrored reflection of the reactive, fraught, and bombastic political uncertainties of post-Sputnik America.

On August 12, 1960, the new NASA successfully launched Echo IA on a Thor-Delta rocket. When it reached its 1,000-mile high orbit, a small explosion of gas inflated the 150-lb, mirrored aluminum-coated Mylar satellite to its full, 100-foot diameter, spherical shape. Engineers at Bell Labs in Holmdel, New Jersey beamed a pre-recorded message to the satelloon, which bounced it back to the Jet Propulsion Lab in California, and to the world:

"This is President Eisenhower speaking. This is one more significant step in the United States' program of space research and exploration being carried forward for peaceful purposes. The satellite balloon, which has reflected these words, may be used freely by any nation for similar experiments in its own interest."

Long after its launch, Echo remained in the public eye thanks to the publication of weekly orbit schedules and tips for taking time-lapse pictures at satellite viewing parties. The first photo of Echo IA in orbit was taken within hours of its launch by a Northwestern University student named Jonathan Blair. Many more followed as professional and amateur photographers alike submitted images to their local newspapers, which circulated them through wire services and magazines. In these photos of the night-time sky, one star, the “American Star,” moves against the rest, leaving its glowing trail across the sky.

Though Pierce’s practical communications relay experiments at Bell Labs provided the rationale for Project Echo’s existence, they amounted to just a few proof-of-concept demonstrations: some long-distance phone calls, a transmitted photo, a few songs. The greater impact came just as Von Braun had imagined: from the clock-like spectacle of this “American Star,” which helped to ease Americans’ Space Age insecurity; to propagate the U.S.’ “Open Sky” policy against a feared Soviet militarization of space; and to normalize the concept of living with satellites always overhead.

Since the 1960s, expansion of manned space flight and human activity in space drew public attention away from the rapid proliferation of satellites—except, ironically, among astronomers. Efforts to update NGS-POSS were complicated by the increased "contamination" of their astronomical observations by satellites. An analysis by the Royal Observatory, Edinburgh, found that sky surveys (including a POSS II) made after 1980 had more than twice the satellite contamination of those made before 1980.(9) And so it is that the first, obsolete Palomar Observatory Sky Survey is also the final photographic portrait of earth’s sky before mankind inserted itself into it. 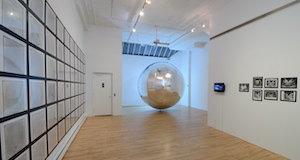