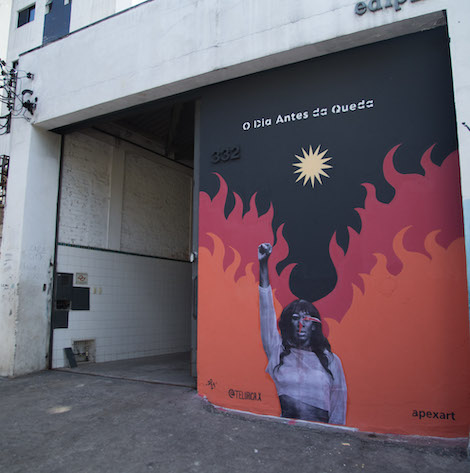 In conjunction with The Day Before the Fall

Artists Bruna Kury, Diran Castro and Mogli Saura talk about their practices and the connection between racial and colonial violence, gender dissidences, and the construction of otherness. The talk was followed by a book launch of "Post-pornography as a weapon against the colonial machinery" by Bruna Kury, "Artistic modes in ecologic intersections: eco-monstrosities for the end of the human world, between earth peoples and dissident groups" by Mogli Saura, in collaboration with Linga Acácio and opening text by Pedra Costa, and a musical performance by Mogli Saura titled "Anti-Project Anarcho-Fake."

Diran Castro, 1978, Martinópolis, São Paulo - Brazil, works transversally in visual arts. She has been a mediator in exhibition spaces for 9 years, developing her own work concurrently. Diran researches the possibilities of reading works beyond paint layers, having lectured in Switzerland, Vevey and Lausanne. Her project “Your children also practice” investigates men between 18 and 25 years old, white, wealthy and self-declared straight through sex work, a research that cultivates dialogue and exercise listening revolving around race, class, gender and sexuality.

Mogli Saura (1987) is an experimental artist, writer, permacultore and yoga instructor. They have been experimenting and investigating urban interventions since 2006, aring from the frontiers of art and life, madness and crime - and the categorical-structural relations involving race, gender and class. They launched their first EP in 2020 with the Anti-Project Anarco Fake. Since 2017, Mogli elaborates the notion of intersectional ecology, mapping practices such as permaculture, agroecology and ecosystems as a basic element of artistic, anti-capitalist, marginalized and dissident movements. This cartography will be launched this year in their first book. They started at Dança Butoh in 2011 and since 2013 they have performed ritual performances and led Kaos Butoh's experiences.

Bruna Kury is a Brazilian anarcatransfeminist, performer and visual artist, currently based in São Paulo. Her creations are crossed by issues of gender, class and race (battling the prevailing compulsory heteronormative patriarchal cis-tem and structural oppressions-class WAR). She has performed with Coletiva Vomito, Coletivo Coyote, La Plataformance, MEXA and Coletivo T. Bruna presently investigates sonorities in the postporno and objects stemming from her performances. She had participated in the Capacete (Rio de Janeiro), Community (Argentina), Festival Abnormal (Mexico) residencies, collaborated on the organization of the postpornopyrata residency in Fortaleza (Brasil) and performed in the Libres y Soberanas aka Performacula festival in Quito.

Clarissa Aidar is an artist, writer and community organizer from São Paulo. Her work is concerned with queer comradeship and the creation of shifting identities and alliances to deceive state vigilance and the commodification of subjectivity.