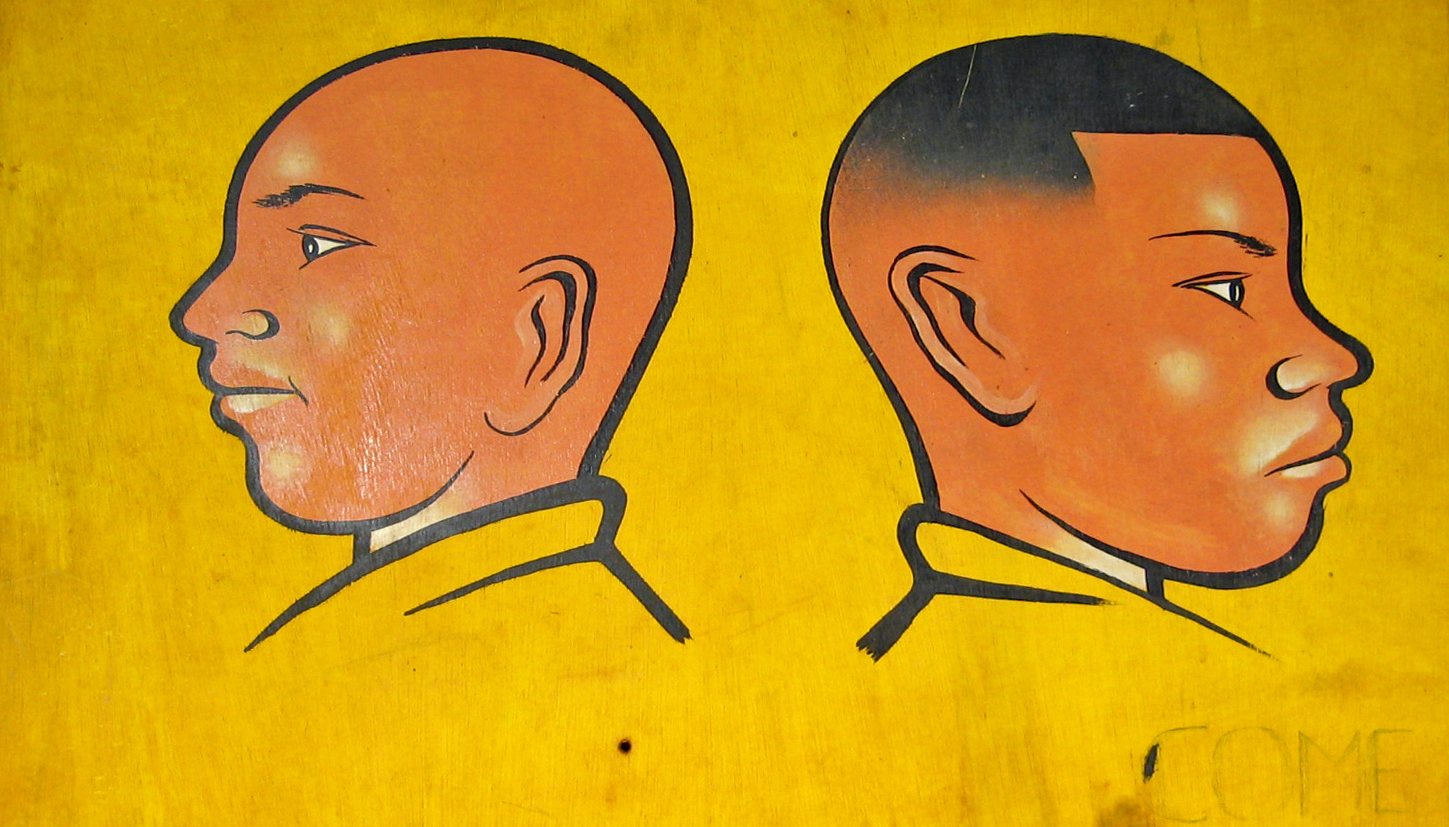 Unidentified artist, barbershop sign painting, Cameroon, c. 1990
x
Tony Bennett pointed to a Kokoschka landscape in a book at Hacker's on 57th Street and said he liked what Oskar did "along the peripheter," coining a term of surprising relevance. Though referring to the formal meeting of the perimeter and the periphery he innocently zeroed in on a murky netherworld where success and failure, acceptance and indifference, and Tony Bennett and Oskar Kokoschka meet. Away from the banal fuss accompanying the validated, the artists brought together under the unwieldy but somehow catchy moniker of "The Peripheterists" are in many cases low-key and unsung, perhaps less orthodox in their ambitions than most, and prodigiously gifted. Forming a diverse and unaligned but oddly complimentary non-scene that doesn't really register with either the hoi polloi or the intelligentsia, all are fairly unconcerned with and unknown in that rarely satisfying milieu known as "The Art World."

Much to its detriment the current arena is so professionalized and hermetically incestuousness that it rarely has room for those taking a left-handed path free of facile gestures indebted to terminal cronyism. That luck, brownnosing, social standing, and ladder climbing have much to do with getting paid is a given and not particularly revelatory, but it does give rise to an urge to address that vexing situation with a gathering of mostly uncelebrated rare birds. Is it too much to ask that art can be for everybody, and challenging, at the same time? Especially that made by the living? The present A-Team gets plenty of attention, ego-gratification, coddling, and legitimization, which added to their frequently hackneyed output incurs irritation and fatigue. The lionized can be tiresome. Certainly not all eminent players are that bad but a lot of them traffic rather a bit too much in topical and fashionable tropes. For the most part this heterogeneous bunch doesn't fit. What fits has had its rough edges smoothed out, or never had any in the first place.

This isn't a rant about the evils of the big bad art world or a polemic, God forbid. Instead it's a window onto a parallel universe of art without a capital "A." It's not about cultural production but a surprisingly rare combination of fierce independence and accessibility. On taking stock of my own collection a realization dawned that much of it is by outsiders who elude the normal definition of the term. That is, people who didn't study, or have been committed, or are "primitives." Most of the artists in The Peripheterists fall ambiguously outside of the parameters of that classification, as well as the high-profile contemporary scene, "street art," or cutesy and cloying popular dreck. It should be noted that most are amateurs in the exalted sense of the word, though several do make a living from it. For them there is a curiousness of recognition and success but not in the usual precincts, and it can be argued that they reach a wider audience than many ballyhooed operators with mid-career vanity museum surveys. And in a stealth fashion, as the masses are usually unaware of who the "author" is, another instance of people not appreciating or understanding what went into what is right in front them. Which is probably just fine.

Some went to art school, most of them didn't, a few have shown in galleries but more than half haven't. In a sense what they do is sort of old fashioned in that it isn't theoretical or conceptual, at least in a simplistic analysis, and isn't overly self-referential and only targeted to initiates. Another reason this set isn't on the radar is they aren't dead, insane, have a sexily sordid back story, or embody clichés of frustrated estrangement. The kind of creativity on display repeatedly gets noticed only as it moves into easier to digest territory, oftentimes posthumously. With the exception of one or two, these artists are alive and sane but are less obsessed with cashing in, or burnt out, or can't handle the bullshit, or are into other things. Most of them are still doing it, while a couple quit cold turkey and have gone on to meaningful endeavors in the so-called real world.

If it hasn't become glaringly apparent already there's an autobiographical aspect at play because this peripheter is personally familiar terrain. You wear your heart on your sleeve, so the curator sympathizes. And oddly enough the enunciator's interests coincide or at least have common cause with the artists'. Since I've written about many of these people, or in a few instances helped organize shows of their work, obviously I like what they do. And usually like them as people too. With twenty-eight participants it's impossible to detail all the serendipitous associations, but a handful of anecdotes and tidbits should shed some light on the blend of rationale and intuition that brought it all together.

That calls for an accounting of cross-pollination, allusive congruencies, and shared passions wedded to connoisseurship. For a while I took a lot of photographs of empty skateboard ramps and bowls, so I dig pictures by old friends of the shabbier variety. I met a great painter and now photographer on a ramp in Stuttgart in 1986, and spent a month in Cameroon with him ten years later. He was buying barbershop paintings, and I followed. I'm keen on his enigmatic skyward-looking bikini-clad model, and the haircut heads' flatness and absence of guile. So different, but not that far away in the end. I loved (and still do) the Big Boys, the unrivaled early 1980s Austin, Texas punk/hardcore/Oi!/Go-Go/funk band. It ?s worse than trite, but they and their ilk changed my life. R.I.P Biscuit. Insouciant disaffected tomboyish Italians in front of graffiti-covered walls are great, as are striking and definitive documentation of the originators bashing out their discordant noise thirty years earlier, by a true gentleman and the hippest Pewabic pottery collector I'll ever know. Ennui-suffused suburbanites in Modesto, there's just something about the Central Valley. Conceivably it's because my dad's from Fresno. Nubian Goddesses and Lake Michigan bathers, Chicago fantasy girlfriends, and comical Philadelphia police cars too. Art that makes you smile. Subway cars and UFOs in the skies above Manhattan. Textured pieces of paper with four distressed bands of color and one piece of tape, children's drawings that are way better than most (I fancy myself an expert), and floating planes, aliens, and martini glasses. And I like wigs, specifically biomorphic Venus flytrap hair disasters extrapolated later as sculpture.

Those are some of the predilections illuminating the impulses more than an intellectualizing exoskeleton that can only support so much, and here are some more. In China I got to know a Puerto Rican from Sunset Park and we once fired the same AK-47 at a shooting range outside of Beijing, so a big drawing of a gun. And a small but impressive depiction of a vertical DOHC supercharged, fuel injected two-cylinder with an exhaust silencer. A bike, my Huffy, courtesy of the coolest font of two-wheeler knowledge around. A pale green shirt, what we wear, highly personal inanimate items that can't last forever. They outlive their usefulness and go into the past. So mementos. Plans that transcend their utilitarian purpose and stand on their own. Grew up skiing, so I've been using and admiring folded ski area maps forever. Blueprints, diagrams, designs, they lack self-consciousness and have a particular aura, especially ones that end up actually getting built. The triumph of the sketch becoming anything but, and I've been lucky enough to ride many cement wonderlands designed and built by the frontman of Grindline the band. Wax monster in a cage by the sexiest RN, CNOR alive, a stripped-down essentialist pink wood face, and demented hallucinogenic freak-outs from a twisted Belgian. Dragons, floating cityscapes, and busty Latinas sporting elk antlers are prison art at its best. Thanks Lefty. Discoveries made through the magic of photocopied self-publishing. Story of My Scab, truly inspiring, plus I like donuts, and anything by the creator of 88 Shades of Grey. The same goes for the naughty genius from Man Bag, a painter of unqualified skill and poignancy and an underground hero who, if the world were fair, would be feted. The sly, troubling, and droll sexually active adolescent couple is just the tip of the iceberg.

So what do the third grader, a corporate headhunter, a world-travelling gardener, and a welder (to take a random sample) have in common? Possibly not much except a tenuous and inexpressible affinity, and that their efforts can resonate with everyone from mavens to straight shooters who reach for a revolver when they hear the word culture. That is the hope ? this is a test. This is a contrarian B-team of sorts, though that designation seems to ruffle feathers. Understandably, since association with any "B-Team" can feel like a slight, though I have always thought they're the more captivating squad. Partially it's an underdog thing, though there's a lot more to it than that. This gang might never have tried that hard to get their piece of the pie or turned their backs, or they did try really hard but never became the flavor of the month. The lack of acknowledgment and kudos might have been all for the best as far as their art is concerned, though of course that can be a source of much chagrin, disappointment, and worse. To a certain extent those factors, experiences, and histories are what make this assemblage slightly raw, with an undercurrent of neurosis and obsession and a tilt toward the refreshingly unordinary angle vis-à-vis traditional genres. Also engrossing and engaging, allusive, and quite unmindful of the pseudo avant-garde status quo's calcified rules. Mixed together it's just good (possibly great) interesting art that brings up passé but eternal questions about what art is, why people bother, if they walk away from it all do they remain artists, and are the most creative necessarily the ones who "make it."

The author would like to thank Jim Supanick, who actually spoke to Tony Bennett and generously reported the anecdote that provides the title for this exhibition.


Jocko Weyland is the author of The Answer is Never - A Skateboarder's History of the World (Grove Press, 2002) and has written for Thrasher, The New York Times, Cabinet, Apartmento and other publications, and is also the creator of Elk magazine, books and gallery.