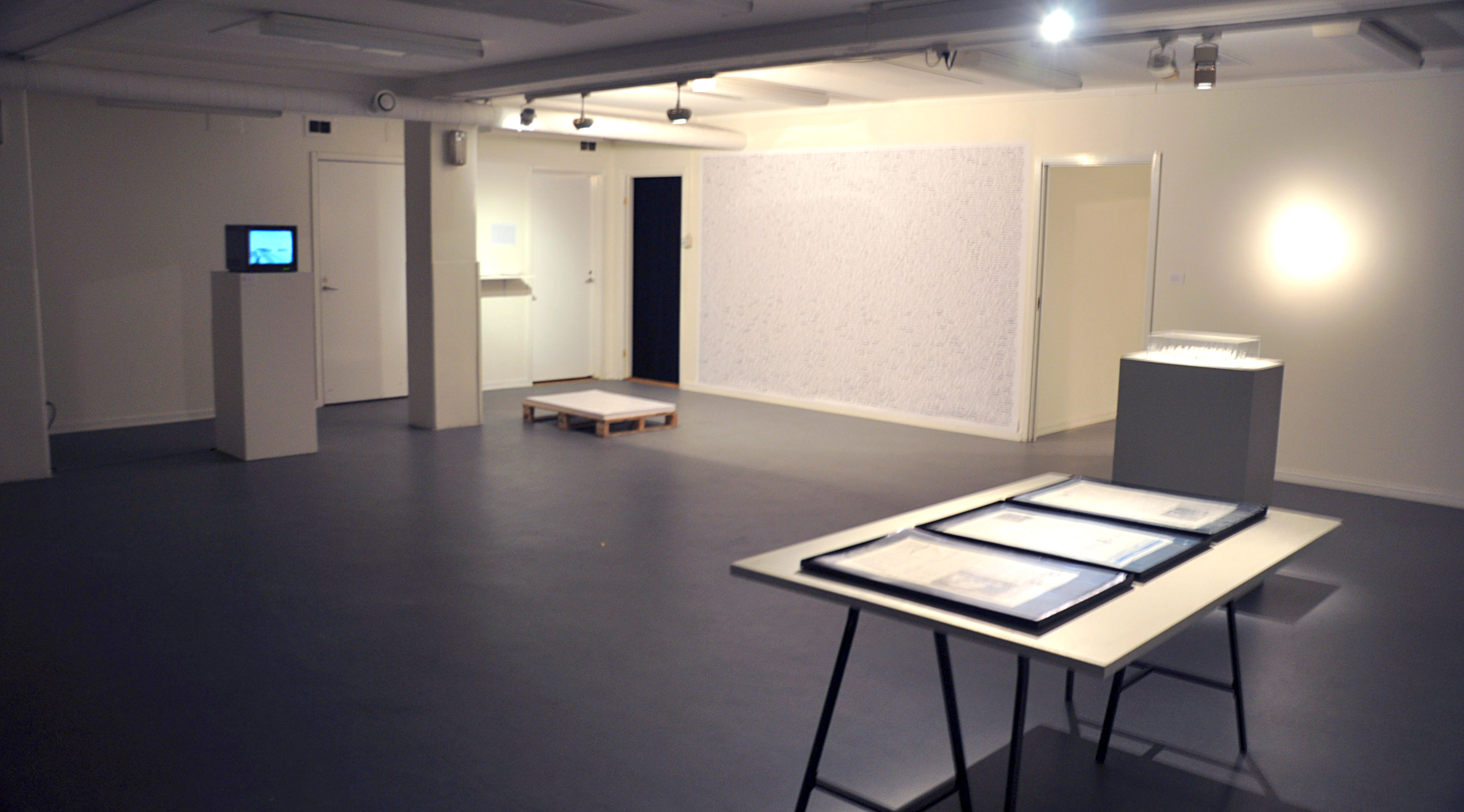 Washed Out, installation view.
x
Washed Out is a site-inspired exhibition held in Central Tvätt, a community laundry facility in Hökarängen, a typical Stockholm suburb built in the 1940s according to the utopian urban ideals of early social democracy. Decades later, this still functioning laundry facility shares its premises with a publicly funded art center, Konsthall C, and a small collection of vintage laundry machines.

Washed Out
Rewriting Hi(story), as we remember it...

It was the day after the Swedish elections and the country was in an uproar. The new government featured the third consecutive defeat of the Social Democrats as the majority party in parliament, and a clamorous minority of right-wing conservatives were now in positions of power. Social democracy was no longer strong enough to shield Sweden from broader European or global trends, and the system based on communal values and consensus is now slowly
being replaced with a new liberal democracy based on more individualistic values.

A long journey on the Tunnelbana took us - an international group of young curators - far from the city center to Hökarängen, a suburb south of Stockholm, to visit a peculiar art space called Konsthall C. Director Kim Einarsson opened the door to greet us. After a look at the current exhibition and coffee, she explained the history and mission of Konsthall C as an art space uniquely positioned to create dialogue between art and politics largely due to its unique location.

At the end of our discussion, we toured other areas of the building. Adjacent to the space for contemporary art, to our surprise, were areas including a functional laundry room and other spaces for social gatherings. The utopian goals envisioned for modern Swedish society based on tolerance, equality, and mutual trust suddenly came into focus for us, and at that moment—in light of the recent elections—we began to understand why so many of those goals were beginning to fade.

Kim explained to us that the goal of suburban developments like Hökarängen was to realize the radically new, utopian social democratic ideals in the 1940s. Beyond private family dwellings, the developments aimed to create an overall environment that offered necessary amenities while simultaneously providing models for peaceful, social, and productive interactions between neighbors. The "tvättstuga", or common laundry room, is a significant example. Modern washing machines were provided in common areas to make domestic life less arduous, yet imposing a social dimension on the undesirable task of washing dirty clothing led to tensions rather than friendships, transforming collective laundering from a tool for mutual understanding into a reason to pursue individualization and territorialization.

And so, while the grand plan of Swedish society was to make every experience positive, the "tvättstuga" notoriously provides one of the few conflict zones in an otherwise conflict-adverse society, where people go to great lengths to avoid others in what is supposed to be a social space.

Decades later, Konsthall C was established in Central Tvätt [the shared laundry facility], yet it remains interesting that a conflict zone (laundry facility) sits adjacent to a zone intended to stimulate dialogue (art center), and this unique dimension provided an interesting setting for us to explore issues already stimulating our minds regarding art and politics, and the making of history as it was unfolding that very day.

We were late for our appointment with Romanian born artist, Stefan Constantinescu, and fortunately, so was he. In between coffee and cigarettes, he presented his work and something struck us as very meaningful: "In my practice," he said, "I aim to position myself as a witness to the course of history."

Stefan was referring to his role in a Romanian generation profoundly marked by the passage from communism to a capitalist democracy. Noting the critical need for history to be remembered, it is interesting that his practice involves a combination of "objective" historical facts with personal accounts. His work encouraged us to ask: What should be preserved for the future? Can personal narratives also be considered as facts? Who claims authorship over knowledge relating to collectively lived pasts? How are documents concerning the past transformed through the act of reading or re-writing?

Immersed in a week's worth of art and politics, we decided to write a proposal for apexart's Franchise program over the course a few hours. The deadline was the next day. We had an opportune political moment, a great location [Konsthall C and the tvättstuga] and a desire to create something best discussed in that very premise. "Washed Out" was born.

Recollection
All over the world - one month later
Internet

We go our separate ways, each to a different country and continent. In the process, we continue discussing new ideas about history and how it can be transformed literally and metaphorically. "Washed Out" is selected by apexart's jury. Our dates are set, we have 2.5 months to make it all happen. We need a plan to address our multiple interests and concerns. A torrent of emails and skype conferences begins, we must narrow down the concept, invite artists, align budgets. There is no time to waste.

Washed Out by CuratorLab
"The real image of the past moves on fleetingly."
– Walter Benjamin, On the Concept of History, 1940

If history is a form of institutionalized memory, the artists featured in Washed Out attempt to invest it with personal and shared elements to open up, alter, and make real the greater multitude of voices affected and involved. Medium and method vary. Individual and collective actions both carry weight. Revealing figures forced to the margins of social visibility, reconstructing public narratives and exposing moments of absence, propose ways in which history can be written in the future. The artists thus demonstrate the dynamic work of history as an organic, mutable subject that changes over time.

How do we remember the past? Through formal and personal documents, as well as personal memories. Artworks are documents and, by contributing personal interpretations to "official" narratives concerning collective projects that have fallen out of date or otherwise gone awry, artists assert "do-it-yourself" versions of history that challenge ideas or events assumed to be established or obsolete - in other words, washed out. Rewriting historical documents, interfering with media images, critically evoking idealistic propaganda, and asserting Aboriginal sovereignty, are all methods of revealing something other than the hegemonic status quo. Re-Interpreting the past

Daniela Comani's It was me, Diary 1900-1999 text piece narrates a personalized account of 356 days of world history, drawn from the span of 99 years, as if each moment were her own lived experience. Dealing with everyday documents and newspaper clippings, Estefania Peñafiel Loaiza's installation sans titre - Les figurants seeks to highlight through erasure those who stand witness to events, whether by coincidence or destiny. Similarly, by erasing the words "HOME AND" while simultaneously undoing an earlier erasure of "NATIVE LAND" in Rethinking Anthem, Algonquin artist Nadia Myre reveals the role of Canada's national anthem as a tool used to validate settler colonialism. Stefan Constantinescu's The Golden Age for Children, offers a challenging account of Romania's difficult history intertwined with the artist's biography over two decades in the unexpected form of a pop-up book.

Moving stereotypically female, domestic activities into public settings newly politicizes them by raising questions about how people are portrayed in history, or not portrayed at all. Is it the task of women to clean up the aftermath? Maja Bajevic's video installation, Women at Work; Washing Up, transforms the common act of laundering into a political gesture when a group of female refugees perform the repetitive manual activity with textiles featuring embroidered excerpts of epic texts
dealing with ideological legacies. Vacuum depicts the artist, Raeda Saadeh, vacuuming with continuous motion in a desert landscape near her home country of Palestine.

Specifically for Washed Out, we have commissioned two projects seeking closer links between the concerns motivating the exhibition – i.e. coming to terms with imposed social models, responding to changing circumstances, or negotiating future history – and the site itself. Presented with the history of Central Tvätt, Laercio Redondo reflects on the effects of idealist models for social behavior, only to propose an alternate way of looking at the history yet to come: what comes after the
various ideologies of modernism and modernity? His multiple Time Changes Everything Around suggests a space of negotiation between the artwork and viewers, as well as the physical space of the exhibition and the space of the city beyond. The young Swedish collective Konsthall 323 (Frida Krohn and Ylva Trapp) and their art center on wheels, will take up residency during the Washed Out exhibition period, and will perform a series of storytelling based interventions at the exhibition site and in the near vicinity.

Washed Out is supported, in part, by Konsthall C and CuratorLab 2010/2011 at Konstfack University College of Arts, Crafts and Design.