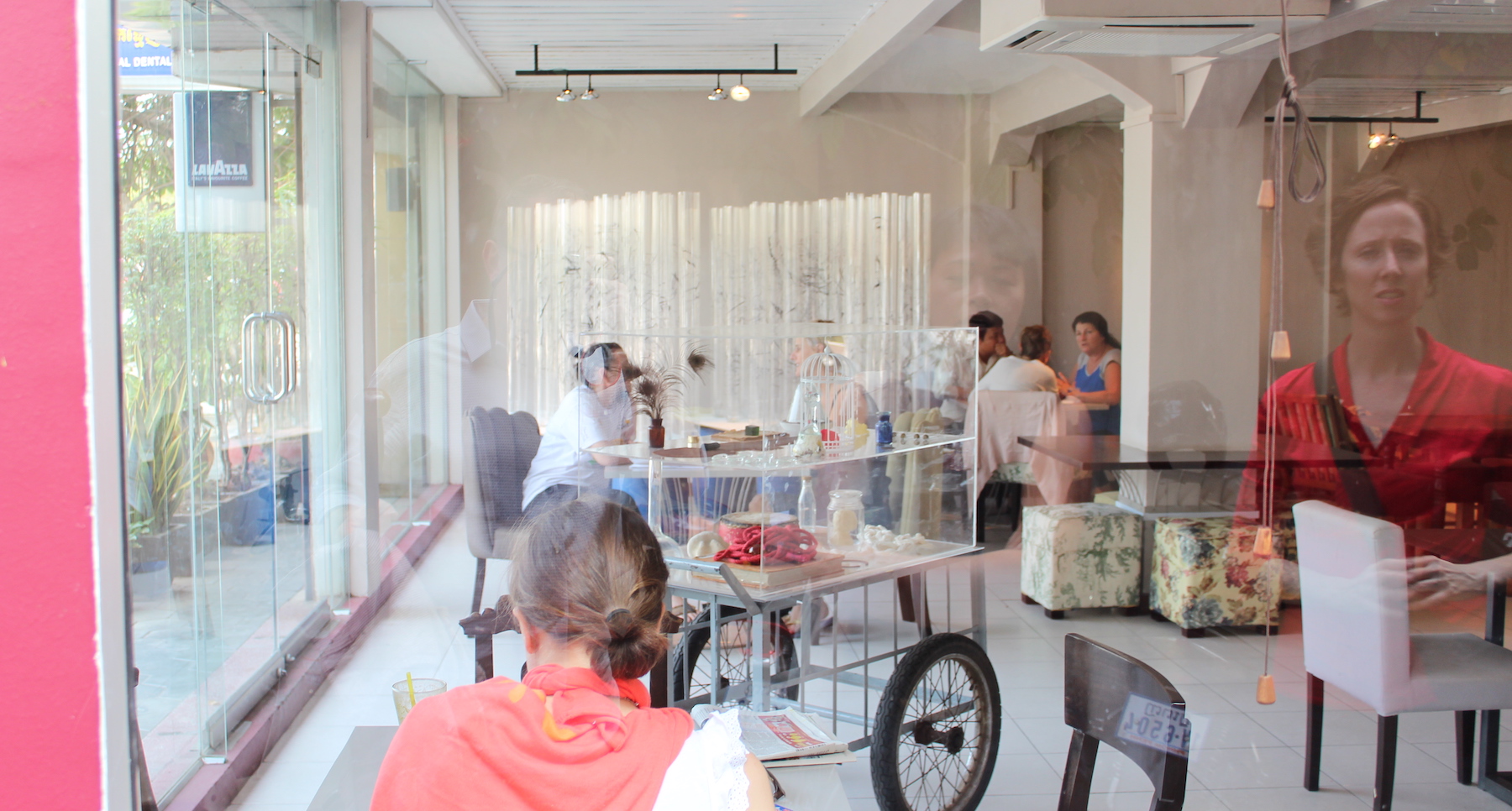 On the Streets, installation view.
x
This space between

I
It began with barter, then trade. In the days after the 1979 fall of the Khmer Rouge, people gathered around the old rail station in Phnom Penh to exchange goods and to rebuild their lives. Then, as now, barter and trade offered a means of self-employment for those with little or no capital.(1)

In Phnom Penh, vending?whether stationary or itinerant?is a particularly important form of livelihood for the poor, and especially for women who are the heads of their households. A 2008 survey found that women comprise 97% of vendors, typically ranging in age between 30 and 50. Most come from the countryside with minimal formal education, and make an average daily profit of US$2.58 on which an average household size of 5.3 must subsist.(2)

The work is grueling. Vendors start before dawn and end after dusk. With meager profits, they have to cover arbitrary taxes and fees, avoid being robbed, and manage harassment by the police and market security. Despite these hardships, street vending provides a means of economic independence, and, as such, is an integral part of the local economies and cultures of Southeast Asia.

Across the region, however, national and local governments have passed policies that forbid vendors to operate in popular tourist areas. Street vendors and their wares are deemed unsightly, adding to street congestion, occupying valuable sidewalk real estate, and posing a harassing presence for tourists. While local and international policymakers and investors espouse the virtues of modernization as economic empowerment for local communities, it is the working class who must bear the disproportionate costs.(3) On the Streets is an exhibition inspired by Southeast Asia's vendor cultures.

II
I lived in Saigon and Hanoi on-and-off each year from 2004 to 2008. During this relatively brief period, I saw increasing police harassment and prohibitions of vendors in the pricy, downtown areas. Skyscrapers, luxury hotels and high-end shopping malls sprang up all the while. A similar process was happening in Phnom Penh, which I first visited in 2010. Residents recounted stories of artists and the working class displaced by gentrification projects, and I wondered how these changes would affect the city's street vendor population.

On the Streets is a comparative look at the effects of migration and global capital in Phnom Penh and other locations. Participating artists will exhibit new work that considers the theme from the vantage point of their locale: Boston, Los Angeles, Phnom Penh, Saigon, and Vienna. In conjunction with the opening reception and artist panel, they will meet in Phnom Penh to produce collaborative actions that respond to the imperatives of mobility and displacement commonplace to the lives of street vendors. Due to its thematic scope, this exhibition was invited to be a part of the 2014 program of Our City Festival, an annual initiative on art and urbanization in Cambodia.

For Moving, in Psar, Amy Lee Sanford went to the markets of Phnom Penh and recorded these sounds reverberating, bouncing around. She wondered "what Phnom Penh sounded like when the Khmer Rouge came." Sounds inhabit and shape our memories and emotional lives. Sanford's project reminds us that the working class built Phnom Penh. State efforts to regulate where vendors can work and what they can sell say much about who will occupy the cities and towns of tomorrow.

Kong Vollak ventures around the city on a motorbike, pulling a cart with the iron frame of an edifice rising amidst a rice field. A response to what he sees as the unchecked development of the city's old quarters at the cost of razing architectural monuments and the histories they hold, Building is also an invitation for dialogue with the people he meets. Gentrification will increase the population density of the city center, and the stresses are already felt in the crumbling infrastructure and the displacement of the working class.

Sandrine Llouquet has witnessed this process in Saigon, where she moved in 2005. For six years she lived in District 1, home to the most expensive real estate in the city. A neighbor operated a juice-and-coffee cart in the adjacent alley. For her sculptural installation titled Ambulatilis, Llouquet repurposes a similar steel cart into a curiosity cabinet.

Ancestor to the museum, the curiosity cabinet was a microcosmic space for rich people to collect and display objects, particularly from their travels. For the Vietnamese French Llouquet, the curiosity cabinet brings together the space of the foreigner and the magic of discovering strange and mysterious objects. As in the life of the street vendor, the project revolves around the constants of displacement and the need to be resourceful and imaginative.

While the juice-and-coffee vendor claims a space of her own, the street vendors whom Margaret Honda observes are among the most transient and vulnerable of the working class in Los Angeles. In the land of cars, it is common to see vendors standing on street medians, selling flowers and fruit. Likely immigrants, perhaps undocumented and at risk of deportation, they pace the medians for five to six hours a day, standing near the intersections of major thoroughfares, rushing to hand a bundle of flowers to the occasional buyer. Most drivers avoid eye contact. The sight of the vendor's body is a discomforting reminder of what the margins look like.

This discomfort travels in both directions. The vendors were apprehensive about Honda's efforts to engage them in a collaborative project, so she recorded her own pacing back and forth instead, for her project titled Vendor's Walk (Los Angeles: Forward Basic [slow, medium, fast tempos], Walk and Progressive Sidestep, Back Corte, Closed Promenade, Onestep Backward Reverse Turn). That "failure" of collaboration may be read as a metaphor for the irreconcilable gap between privilege and disenfranchisement in a globalized economy that relies on undocumented immigrant labor.

Rainer Prohaska's project Othello seeks participants on the streets who are willing to wait for a two-hour meal to cook. Using locally available material, he constructs two mobile ovens, to take one around Vienna and the other around Phnom Penh. As with Kong, his travels around the cities will invite his guests into a conversation about the fast pace of urban life. It is in the braking of time that Prohaska's project questions the costs of global urbanization on the body's ability to sustain itself, and the balance between mobility and stability.

Ashley Billingsley's installation Boom and Bust returns us to disembodied capital. Through the ongoing recession, she observed the stalled development of a former Filene's Basement retail site in the Downtown Crossing neighborhood of Boston. A rough-and-tumble bargain destination that brought together shoppers of all classes, what endured of its pragmatic ethos was a handful of street vendors selling wares nearby?gloves, scarves, cheap handbags. When new developers took over the project and construction resumed, property owners lobbied the city to reduce the number of street vendors and replace some with more desirable alternatives.

Billingsley's installation presents a dematerialized topology that alludes to gentrification's embrace of disembodied capital over the livelihoods of real bodies. The project speaks in the vocabulary of an urban vernacular?throwaway Sharpies and marks on the acetate inspired by the appearance of Tyvek, the sheets used during construction to protect interior spaces from the elements. Like the material that Billingsley employs, the vendors have been deemed expendable in the new economic order.

All six artists will meet in Phnom Penh to choreograph actions that respond to the resourceful street vending culture of the city.

Chuong-Dài Võ is a curator and writer based in Southern California, and a Visiting Scholar at the Center for Southeast Asian Studies at University of California, Los Angeles. She is writing a poetry collection and a scholarly manuscript titled An Assemblage of Fragments: Transnational Vietnamese Culture and Post-War Returns. She has received fellowships and grants from the Mellon Foundation, Fulbright Program, National Endowment for the Humanities, and University of California PacificRim Research Program, among others.