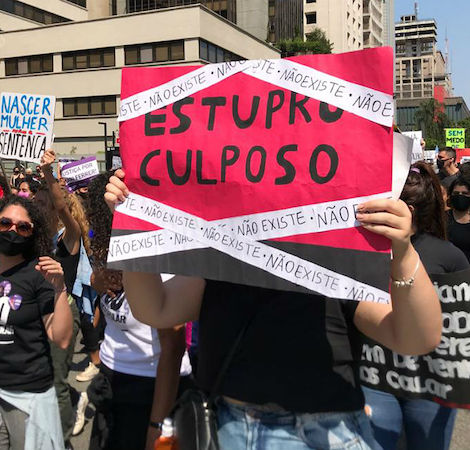 Living as a Brazilian Woman Today

In conjunction with Oh, I Love Brazilian Women!

This event will be presented in Portuguese.

Join artists from Oh, I Love Brazilian Women! as they discuss the political realities of living as a woman and an artist in today's Brazil.

Participating artists from the exhibition Oh, I Love Brazilian Women! will explore themes that permeate their work in relation to being Brazilian women living and working under the current repressive state.

A recurrent topic of concern for many Brazilian women is violence. The artists will be joined by Isabela Guimarães Del Monde, a lawyer specialized in issues involving gender violence and abuse. Her participation will help contextualize the conversation both historically and through a lens of present lived realities. The discussion will be facilitated by curator Luiza Testa.

Isabela Guimarães Del Monde is a lawyer and co-founder of Rede Feminista de Juristas (deFEMde). In addition to it, she is a partner at Gema Consultoria em Equidade and coordinator of the movement "Me Too Brasil". Isabela was an OAB/SP advisor between 2019 and 2011. She's also a columnist at Universa UOL and a winner of the Geração Glamour 2021 prize in the category of Justice. Isabela spoke at TEDxBlumenau 2021.

Luiza Testa (b.1987), is a translator, researcher and art producer from São Paulo, Brazil. She holds a B.A. in Brazilian and French Literature and Languages from the University of São Paulo (USP) and an M.A. in Critical Theory and the Arts from the School of Visual Arts, in New York. Her focus is on questions of gender, sexuality and ethnicity and their interactions in society.