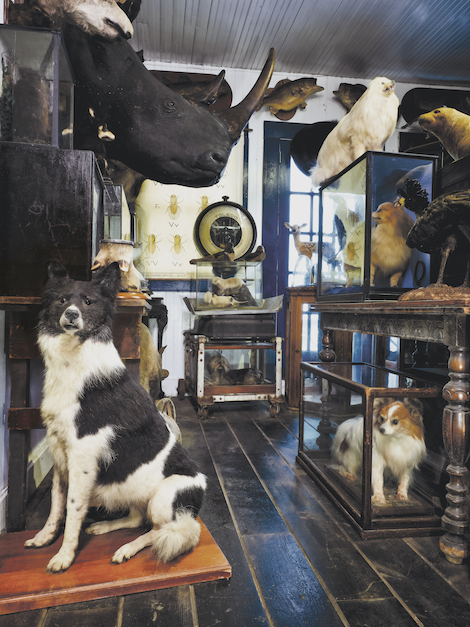 The Art of Collecting: Panel of Taxidermy and Natural History Collectors

In conjunction with The Nature of the Beast

This panel—consisting of a number of collectors of taxidermy and natural history—will explore collecting and what it means to individuals.

Participants will include the curator of the exhibition, JD Powe, artist Mark Dion, Evan Michelson of TV's Oddities and the East Village’s iconic Obscura Antiques, and collectors Adam Baschian and Sabrina Hansen. It will be moderated by Morbid Anatomy founder Joanna Ebenstein.

* Special thanks to Zach Ishmael, photographer, for images from Best Friends Forever: The World's Greatest Collection of Taxidermy Dogs, by J.D. Powe (Cernunnos/Abrams 2021).

Mark Dion was born in 1961 in New Bedford, Massachusetts. Dion’s work examines the ways in which dominant ideologies and public institutions shape our understanding of history, knowledge, and the natural world. Appropriating archaeological, field ecology and other scientific methods of collecting, ordering, and exhibiting objects, Dion creates works that question the distinctions between ‘objective’ (‘rational’) scientific methods and ‘subjective’ (‘irrational’) influences. The artist’s spectacular and often fantastical curiosity cabinets, modeled on Wunderkammen of the 16th and 17th Century, exalt atypical orderings of objects and specimens. Dion also frequently collaborates with museums of natural history, aquariums, zoos and other institutions mandated to produce public knowledge on the topic of nature. He is the co-director of Mildred's Lane an innovative visual art education and residency program in Beach Lake, Pennsylvania.

Evan Michelson is an antiques dealer, collector, lecturer and award-winning curator. She was co-owner of New York City’s iconic Obscura Antiques and Oddities for 24 years, and co-star of the popular TV series “Oddities” which ran for five seasons on Discovery Science. Evan is currently the owner of Obscura West in Lambertville, NJ, where she sells esoteric objects with a focus on the history of science, the history of medicine, and natural history.

Now residing in upstate New York, Canadian-born philanthropist Sabrina Hansen has assembled one of the world's most renowned private collections of antique taxidermy. Ms. Hansen's growing collection includes world-famous anthropomorphic tableaux by Victorian taxidermist Walter Potter, including The Kittens' Wedding and The Rabbits' Village School, as well as noteworthy pieces by other 19th and early 20 century luminaries of the field, including Rowland Ward, Peter Spicer, Edward Gerrard, and Van Ingen & Van Ingen. Her love of animals also led her to found Aslan's Cats, a 501(c)3 rescue organization dedicated to providing sanctuary to felines with special needs.

Broadway actor and collector, Adam Bashian, has been a connoisseur of the unusual his entire life. Through the years, collecting has turned from casual hobby to full time obsession. Traveling across North America as a professional stage actor, Adam has amassed a large assortment of antiques, oddities, and artifacts. His home in New Jersey acts both as an ever-changing private museum as well as the headquarters for Adam’s Instagram oddities shop, Dark.Interiors. His love of storytelling on stage directly translates into his love of collecting and curating historic artifacts.

A collector of rare and antique taxidermy, author and curator JD Powe earned a B.A. in the History of Science from Harvard University. He has loaned specimens to the Morbid Anatomy Museum and the Adirondack Experience. His first book is Best Friends Forever: The World's Greatest Collection of Taxidermy Dogs (Cernunnos/Abrams 2021).

Joanna Ebenstein is a Brooklyn-based artist. writer, curator, photographer and graphic designer. She is the creator of the Morbid Anatomy blog, library and event series, and was co-founder (with Tracy Hurley Martin) and creative director of the recently shuttered Morbid Anatomy Museum in Brooklyn. Her books include Death: A Graveside Companion, Anatomica: The Exquisite and Unsettling Art of Human Anatomy, The Anatomical Venus and The Morbid Anatomy Anthology (with Colin Dickey). Her work explores the intersections of art and medicine, death and culture, and the objective and subjective.