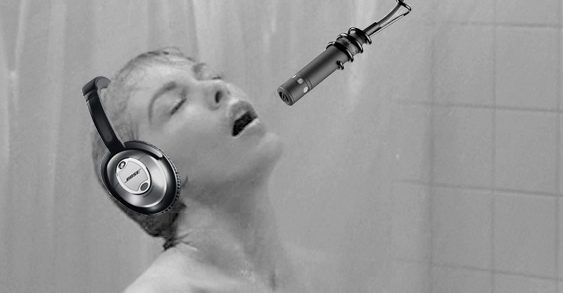 x
L'Isle-sur-la-Sorgue is a medium-sized town with a tiny village at its heart: a kilometer-square island surrounded by artificially diverted waterways and moss-draped waterwheels, its narrow streets radiating out from a central church at non-square, medieval angles. If you walk down Rue Danton, keeping an eye out for the dog shit which always accumulates in the road's central culvert, you'll come upon the Black Sheep, an Irish pub incongruously placed in the middle of Provence. Inside it's all dark wood, Celtic flags, and Joshua Tree posters. It was in the Black Sheep on a recent Thursday night that I had one of the most terrifying experiences of my life. I sang karaoke in a French bar, and I loved it.

The place was packed, and my dad and I were the only Americans there. The meager songbook did feature English-language songs, but hardly anyone chose them; besides ours, the only Anglophone songs all night were Tracy Chapman's "Baby Can I Hold You" and the Beatles' "Yesterday," both performed as heavily-accented, ornate chansons by dudes trying to impress their dates. (In general, the ballad-to-rocker ratio was higher than at any gay bar I've ever been in.) When my dad and I went up on stage together, the karaoke jock ? a wiry guy who looked like DJ Qualls, wearing a fake vintage-Americana T-shirt advertising a gas station in "Orlando City" ? ignored our choice of "Let It Be" and instead played a series of what seemed to be French novelty hits, encouraging us to sing along as the crowd roared. My heart was pounding so hard I could barely hear myself sing, which is just as well, as I was sight-singing songs I'd never heard in a language I knew just well enough 21 years ago to get a 3 out of 5 on the AP test.

Anyway, it was great. It was a very unexpected heightening of what I love about karaoke in the first place, which is that it forces me out on a limb. Now, I am not an adrenaline junkie. I will never skydive or bungee jump or be a Tough Mudder. But to go up on a stage in front of strangers, mic in hand, ready to sing but not sure at all what's about to happen, is one of the great pleasures of my life. I forget myself in those moments. I get out of my head ? the place where I otherwise seem to live 24/7/365.

I've sung with good ol' boys in North Carolina and with strippers in Portland. I've sung in front of a tight, professional, five-piece band, and I've sung along with crummy MIDI tracks that sound like they were generated on an Atari 2600. I've sung in private rooms with friends, and in packed bars where I didn't know a soul. But each and every time I take hold of a microphone, I feel that same sense of queasy excitement ? the knowledge that I am delightfully ill-prepared for what is about to happen, and that everything could go wrong, but I am gonna feel so good while it's happening.

And it's not just me. Singing is, literally, good for you. In her book Imperfect Harmony: Finding Happiness While Singing With Others, Stacy Horn notes that singing causes the body to release endorphins and serotonin. One study even suggests that singing helps the body generate prolactin, the chemical that provides emotional relief when released in tears ? evidence that sad songs may, as Billy Ocean noted, make you cry, but they may also give you a neurochemical boost. So in a world where we pop vitamin C supplements by the handful and load our meals with omega-3s, why don't we all sing more often? Well, partly it's a matter of perception. You can drink a kale smoothie in the office with few social ramifications other than the possibility of Kale Teeth. But it's harder to sing in public. In my day-to-day existence, the singers I tend to encounter tend to fall into three categories:

1. The mentally ill, who sing because singing makes sense to them, even if it does not make sense to the people sitting next to them on the bus;
2. street performers, who think nothing of crooning Sinatra medleys outside my office window for hours at a stretch;
3. my adorable children, who are of course amazing singers whom I would never ask to stop scream-singing "I Love It" for the 746th consecutive time.

None of these options really feels practical for my life. When do I get to sing? Only a very tiny percentage of Americans ? as little as .0001%! ? are rock and roll stars who sing every night before adoring crowds, and even fewer are Broadway ingenues. Some larger percentage of us sing regularly in church choirs or choral societies or amateur garage bands. Some even larger percentage seize the opportunity of having children to sing lullabies, nursery rhymes, songs our grandmothers used to sing with racial politics that don't really stand up to strict scrutiny. Where else? We sing the national anthem at baseball games. We sing our colleges' fight songs at reunions. We sing "If I Had a Hammer" sotto voce while hammering in the morning.

But for the vast majority of humans, our singing takes place ? if we sing at all ? in odd, jerry-rigged circumstances: In the shower, where the acoustics of bathroom tiles make us more closely resemble the resonant, confident singers we wish we were; in the car, where we can crank up the radio's volume loud enough that we can barely hear ourselves at all. And maybe, once every couple of years, we get drunk enough to agree to karaoke, where we ambitiously submit to the KJ "Total Eclipse of the Heart" and then, an hour later, arm in arm with three friends, massacre it.

What does it take for you to cut loose and sing? For some it requires total privacy. Sometimes alcohol helps, or despair. My colleague Aisha Harris has proposed in Slate that her presence as a black person at all-white events seems to make white people feel they have permission to perform. I have a friend who swore up and down she'd never, ever sing karaoke who then, emboldened by a private room populated only by friends, cut loose with a note-perfect version of "Ignition (Remix)." The first time I ever got up the nerve to sing karaoke, it was in a room full of older comedians I desperately wanted to impress ? or, rather, comedians in front of whom I didn't want to look chicken.

Reporting a story on the fertile karaoke scene in Portland, Oregon, I encountered four friends who performed what they called "scaryoke": Going up on stage with no idea what song was coming up, as it had been picked by your friends and submitted without your consent. I still remember the joyful surprise with which one of the group greeted the opening chords of Donna Fargo's chipper 1972 hit "The Happiest Girl in the Whole USA," as the other three members of her group danced like backup singers behind her. It was a pure performative moment: a song sung as a matter of survival, chosen without pretext or dick-measuring intent, picked by friends for a friend with the specific intent of giving her a good time. It's that feeling of unfettered pleasure I'm attempting to recreate ? or at least interrogate ? in SCARYOKE!!!.

Depending on which of our singing environments you choose ? the private shower, the semipublic car, or the karaoke stage ? other visitors will be able to see you a little, a lot, or not at all. You can sing by yourself or with a friend or a group of friends or however many strangers you can stuff into the shower with you. With the help of John Brophy, KJ and creator of Baby Ketten Karaoke in Portland, I've chosen 15 tracks specifically for the different challenges they offer singers. There's classic rock, hip-hop, contemporary pop, indie rock, punk, country, and more. Songs range from 7-minute epics to an under-three-minute nugget of pop perfection. You won't know what song is going to start playing when you press that button. But they're all fun to sing ? that's my guarantee as your friend.

And as your friend I'm also urging you forward, even though you're nervous. You've never sung in front of people before? Give it a try! You don't know all the songs that well? Sing 'em anyway! Embrace your fear. Find your light. Sing like everyone's listening.


Dan Kois is a senior editor in Slate's culture department and edits the Slate Book Review. He's also a contributing writer to the New York Times Magazine. He was a founding editor of Vulture and has also written for New York, The New York Times, The New Yorker, the Washington Post, and the Awl. He is the author of Facing Future, a book about the late Hawaiian musician Israel Kamakawiwo'ole. He lives in Arlington, Virginia, with his family.