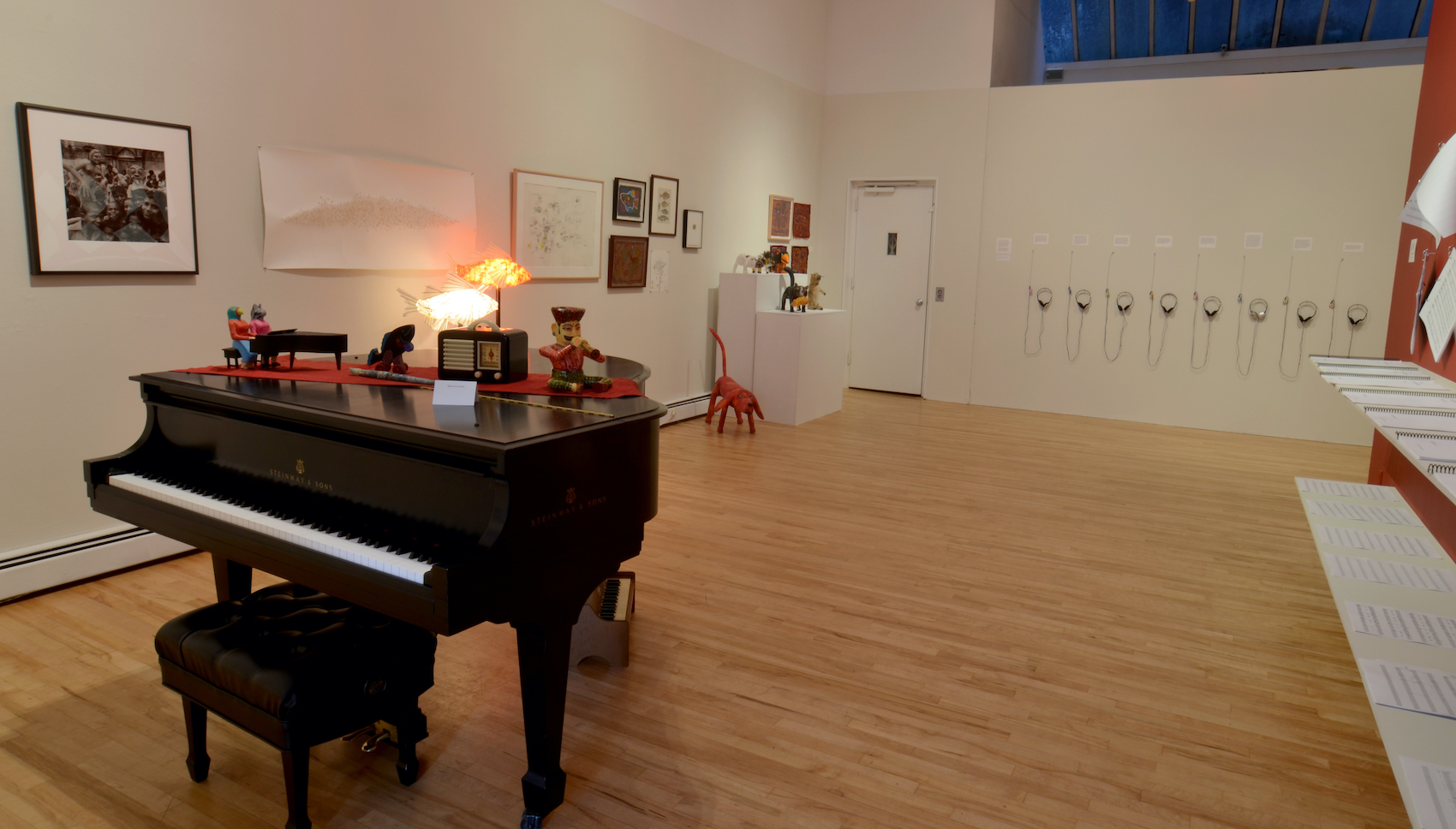 Private Stash: A Musician's Eye, installation view.
x
Most of the discussions about or by musicians are centered on what they hear. This is natural, as the job of any musician is to make what's on the printed page of music or what's in his or her inner ear audible to those who are listening. "Classical" musicians try to take music that we may know and re-interpret it for us so it sounds fresh. "Jazz" musicians organize their improvised flights so that the music can sound composed, while retaining a certain spark that comes from when something is created on the spot and is unique to that performance.

Yet not much is written about what musicians see. Some musicians (and non-musicians) are synesthetes, and for them a musical key (or a number or a letter) appears as a definite color. I do not have this gift, but the exhibition Private Stash: A Musician's Eye is a look at the way that my visual world influences and affects my work as a composer and musician. The piano is tuned in such a way that it will sound good in any key—rather than using exact tones, it is "tempered" so that while the intervals sound in tune to our ears they are actually a bit compromised, and for me, keys have always had deep associations with these moods and tones. When I was young, I played many compositions from the classical period (Haydn, Mozart, Beethoven) and found that I was more adept at reading music in the sharp (or "bright") keys—some of the most joyous music of that time was written in D and G. When I became a jazz musician, I discovered that many jazz tunes are played in the darker, flat keys due to the fact that saxophones and trumpets are transposing instruments; for example, C major on a tenor saxophone is Bb* on the piano. So the warm keys of Db (the key of the great ballads "Body and Soul" and "Lush Life"), Eb and Ab began to attract me more and more. I compose in specific keys most of the time as they evoke certain moods for me and feel a certain way under my hands. The key in which I play a standard tune can be an element that connects me to it.

In addition to how I hear music (and see it on the page), I have always been interested in color, design, graphic composition, and art history. There is much that musicians can learn from the visual arts. To me, playing a standard tune like "Autumn Leaves" is the equivalent of an art student's rendering of a bowl of fruit, a still life or a landscape. You can tell where an artist is coming from if they work with a familiar theme; it makes you appreciate a still life by Cezanne more if you look at a Dutch realist painting of objects on a table. Many of the objects that I surround myself with are unique, colorful and somewhat whimsical. I am not a "collector," but if a certain object "speaks" to me (if I can afford it) I buy it. I learned this lesson many years ago in the late 70's upon first moving to SoHo. There was a little gift shop on Prince Street that had a vase in the window that I would always look at when walking by. I found out the price: $85.00, way too much for a very young musician to spend on something that wasn't practical. But finally I had the money and went to the shop to buy it only to find that it had just been sold. That taught me to act when I see them or deal with regret later on.

Folk art is of particular interest to me—I have acquired a lot of it over the years. My discovery of molas, the fabric/cut-work/crewel/embroidery made by the women of the Cuna Indian tribe off the coast of Panama, happened when I stumbled into a store in Santa Fe and then into a store on Saba in the Dutch West Indies. I was fascinated by not only the personalized technique of each mola but by the stories and images (and sometimes highly mangled English) on these colorful pieces of cloth. Likewise in Santa Fe, I made the acquaintance of an extraordinary wood carver, Miguel Rodriguez, whose specialty is animals and I have acquired a number of them over the years—they ooze personality and capture the essence of each species. A number of the pieces in Private Stash relate to fish—I find them fascinating and have observed them as a diver. Their fluidity, their adaptability, and their eccentric shapes remind me how elusive improvising or composing is. To truly create freely, I have to allow each composition/improvisation to occupy its own world and not to interfere with its organic development. Staying out of the way is very hard to do!

Private Stash also includes many piano-related items: posters, a woodcarving, a series of images of my hands, and a toy piano... The piano is such an iconic image and it is fun to see it represented in different ways. One item has a family history. My mother's second husband was a true collector of autographs including Washington, Jefferson, Roosevelt, Schoenberg, Stravinsky, and dozens more. When he passed a way some years ago, he bequeathed me the only thing I really wanted from his collection—an autograph by the composer Maurice Ravel. He had written the composer in 1933 and Ravel sent his autographed "calling card" back, which he then had framed along with an iconic photo of Ravel from the Library of Congress. It means a great deal to me to have this reminder of Ravel as well as having the actual autograph—a physical connection to a musical hero.

Music is a language—both audible and written. Composing music that is entirely written out is one of the most difficult art forms—one can spend six months to write a piece that takes ten minutes to play and it's easy to lose the forest through the trees. We learn a lot from seeing Mozart's original scores (almost no mistakes!) compared to Beethoven's (covered with corrections and scribbles). Their calligraphy suited their process. I have written music with a pencil almost all of my life. I am particular about the pencils and paper I use—I get a certain "feel" that helps me compose when I am using the right supplies. My initial, scribbled sketches are probably only intelligible by me, and many draft scores have options for certain parts of a piece. I decide over time and by playing it over and over again which option/direction feels best. This exhibit shows some compositions from their first impulse to the final piece and I find the original source sketches graphically interesting. For me, each piece has its own "world" and my job is to get out of the way and let the composition go where it wants to go without thinking of the result. Sometimes, the only way that I can make my composing as spontaneous as my improvising is with the aid of a timing device to make the process more urgent, which forces me to grab an idea and run with it as fast as possible.

There are several works in Private Stash that I have acquired from artists that I have met and collaborated with during my stays at residencies. It has been a great privilege to have been awarded multiple stays at both The MacDowell Colony and the Banff Centre. Particularly at MacDowell, I have received huge inspiration from socializing with artists from other media: visual artists and writers of all types, other composers, and interdisciplinary artists. Dinner-table conversations, after-dinner readings, and open studios can truly change the way one looks at the process of creation and I have ended up with many lifetime friends, some of whom (including poet Mary Jo Salter and painters Marianne Kolb and Mary McDonnell) have become collaborators as well. Buying their work has been a way to stay connected to the inspiration I find in these environments, and provides me with a tangible reminder of people that I have met there.

Private Stash is a look into how I work, what I like and my overall esthetic. It tells a story and gives some insight into what makes me tick. It was great fun to compose in a new medium. Musicians see and hear and I hope this exhibit makes my personal connection to both of these senses a bit more clear.

The New York Times recently called Fred Hersch "a pianist, composer and conceptualist of rare imaginative power." He has been honored with a Guggenheim Fellowship in composition and three Grammy award nominations. He has recorded more than 30 albums under his name ranging from solo piano to mid-sized ensembles. More at www.fredhersch.com. 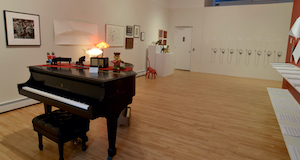