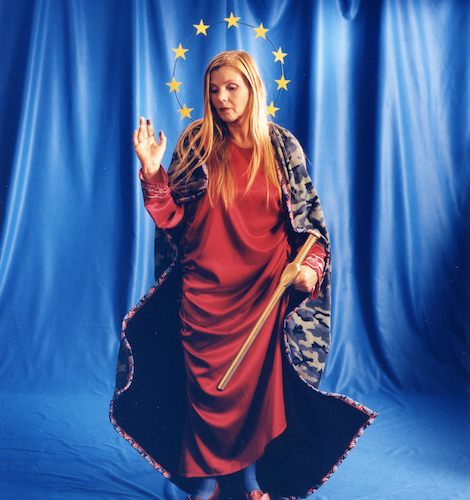 My Pen Won't Break, But Borders Will Online Curatorial Tour

In conjunction with "My Pen Won't Break, But Borders Will"

Join the curator, Julie Hartmann, for an online guided curatorial tour of the exhibition, during which she will highlight artworks that tell stories of refuge, pursuit of happiness, misplacement, violence, and solidarity in various parts of the world, inspired by Parwana Amiri's journey from Afghanistan to Greece and her text "My Pen Won't Break, But Borders Will".

Parwana Amiri—a teenage girl from Afghanistan—arrived on the Greek island of Lesvos in 2019, in hopes of a safer and happier life. What she encountered in the seemingly safe haven of Europe was an overcrowded and underfunded refugee camp that had been, and continues to be, neglected by the European Union— despite the institutions' fundamental ideal of solidarity. Disillusioned but empowered nonetheless, Parwana took a pen and started writing about her experiences in the camp. In a series of letters and photographs, she documented the horrible conditions of a place designed to deter people from coming. The letters are written from her own and other refugees' perspectives, as she is just one of many people seeking peace, equality, happiness, safety, education, and freedom. What they encountered instead was "Fortress Europe."

Some artists present refugees' hopes and aspirations as well as their own experiences with crossing borders, while others challenge the dichotomies between solidarity and nationalism or explore borders and migration from a race and gender perspective. The exhibition ultimately proves that a simple pen, brush, or click can break borders.

Julia Hartmann is a freelance curator focusing on feminist and activist art based in Vienna, Austria. She organizes exhibition series focusing on social movements, digitalization, and feminism and is the co-founder of SALOON Vienna, an international network for women* in the art world. She is currently Associate Curator of the VIENNA ART WEEK.