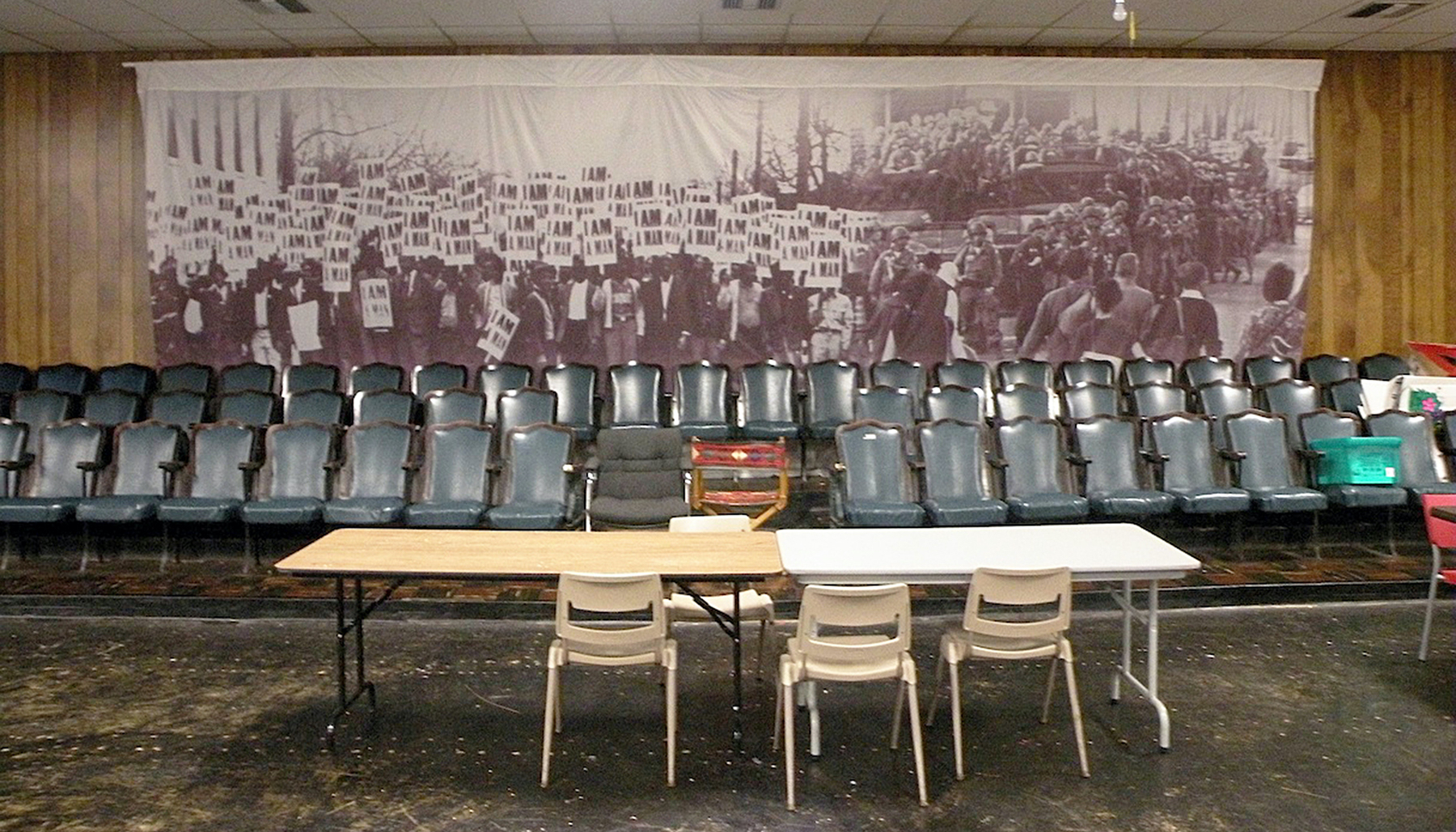 Upstairs at Caritas Village, Harvard St., Memphis, TN
x
Memphis Social draws upon a “social turn” in contemporary art and performance that has influenced curatorial criteria for some time now. In her 2006 essay, “The Social Turn: Collaboration and its Discontents,” art historian Claire Bishop critiques contemporary, “socially engaged” practices as being philosophically based in a neo-Platonic idealism which proposes ideal solutions that don’t reflect contingent reality. She explains that this attitude generates, “homilies (that) unwittingly push us back towards a platonic regime where art is valued for its truthfulness and educational efficacy—not for inviting us to confront the more complicated considerations of our predicament.” Bishop observes how contemporary artists have responded to this tendency, writing, “Instead of extracting art from the ‘useless’ domain of the aesthetic and fusing it with social praxis, the most interesting art today exists between two vanishing points: “art becoming mere life or art becoming mere art.” While Bishop addresses artists’ strategies for making relevant work, the philosopher and cultural theorist Jacques Ranciere positions both artist and audience as “emancipated spectators” jointly escaping the hypnotic trap of the mediated spectacle. Ranciere suggests that we not merely react to what he calls “partitions of the sensible” that perpetuate a fractured sense of society, and that a refusal to do so might lead to a more profound experience of both aesthetics and ethics. Memphis Social seeks to combine, and critique, both of these ideas in an exhibition that examines how to present artwork that is truly socially engaged with its environment and audience. The project is a temporary intentional community of artists and cultural organizations gathered together to form a contingent society that addresses combined aesthetic and ethical concerns.

My experience curating Memphis Social has placed me unequivocally on the ground, tasked with negotiating both public and private concerns in presenting a show that mixes discrete works of art and social performance with community organizations in both institutional and non-institutional settings. This alternative model for an exhibition creates its own, often unpredictable, dynamic and I have needed to be ready with a contingency plan at every turn of events, often navigating the boundaries between the public and private. Maintaining this permeable grey area between private and public might be seen ineffective when attempting to initiate social movements or galvanize political change, but I have found it to be quite practical and humane in its open-ended and non-ideologically driven way of being. The risk of losing one’s private aesthetic stake is taken on the chance that its public enactment is integrally connected to its share, not in historical time, but in ethical contingency. The actual social can therefore be seen as differentiated and cohesive, not necessarily toward a historically determinist normalization, but toward an awareness of an organic continuum of both liminal and embodied agency.

While the balance between public and private has been important to my personal experience curating the show, it has also been a critical part of how the exhibition has come together in relation to its physical presentation. One of my goals in organizing Memphis Social has been to present a wide array of artists as a group ensemble in gallery spaces at the Memphis College of Art, and also individually in alternative locations and public spaces throughout the city. As curator I have worked to problematize “the partition of the sensible” head on by literally displacing many of the artists and their works to locations less ideologically determined than the typical institutional venues. These diverse locales include Marshall Arts, Caritas Village Community Center, and Crosstown Arts—an art center housed in an old Sears warehouse—and many of these locations feature new, site-specific work. Each of these organizations helps to focus social activity and serve communities in real need of coalescent civic centers. The curatorial intention behind presenting art, dance, and musical performance at these locations has been to augment what already takes place there and to offer an objective acknowledgement of their significance to the Memphis communities that they serve. In addition to these alternative spaces, the exhibition is also sited in specialized institutions such as The Cotton Museum, which was the location of the commodities exchange for the crop that defines the South in its agrarian economy and also links it, inescapably, to the history of slavery. The screening here of Kara Walker’s 2005 video 8 Possible Beginnings, along with a collection intervention by the younger, Memphis artist Lester Merriweather, brings to the fore (in this institutional partition) the explicit and implicit national assumptions of economics, labor, and race.

Other participants in Memphis Social such as Tim Rollins and Doug Ashford, represent artists responsible for setting the standard of socially inclusive presentations of aesthetics and ethics in their work as respective members of Group Material (1979-1996). An older generation of artists in the exhibition—Leon Golub and Nancy Spero—extrapolated idiosyncratic imagery from their social experiences in addressing the Vietnam War, Central American death squads, and contemporary feminism. Their work draws attention to what Ranciere has called “allegories of inequality” in social perception. Singular individual vision in the ensemble is represented by the work of the pioneering photographer William Eggleston, who has created a lyrical documentation of the remnants of the Old South in and around his home in Memphis. Younger artists in the show such as Mark Tribe and Chelsea Knight examine the contemporary social phenomena of militia groups in their collaborative work in progress, Posse Comitatus.

While rooted in Memphis, the exhibition brings together artists from such diverse backgrounds and experiences as Tracey Moffatt from Australia and Alexandra Kostrubula from Sweden, and presents the work of artist collectives such as Bullet Space from Manhattan’s Lower East Side. The nomadic nature of contemporary art is underscored by the inclusion of artists such as Virginia Overton, originally from Tennessee but currently situated in New York City, and William Pope L., born in New Jersey but now living and working in Chicago. For Memphis Social Overton is contributing a large site-specific work, which will be presented on a pair of outdoor billboards located across from Marshall Arts; a selection of Pope L.’s Failure drawings will be presented at the Hyde Gallery at the Memphis College of Art. Aviva Rahmani has charged her art with an environmental awareness in restoring wetlands habitats near her home in Maine. She brings this practice to bear in her participation in Memphis Social with a work that interprets the degradation of the Mississippi watershed. My own orientation in the Northeast has, to a certain degree, effected an itinerant defamiliarization and dislocation in my curatorial perspective in Memphis encounters. Artists based in Memphis such as Greely Myatt, Dwayne Butcher, Anthony Lee, and Haley Morris-Cafiero each in their own way interpret both the universal and specific aspects of the life in the city. Myatt is known for his public works that draw upon the history of art and aspects of folk culture. His Rockers sculpture, presented in Memphis Social at the Hyde Gallery, employs a ubiquitous signifier of Southern culture, the rocking chair, in a way that both charms and undermines viewer expectations. Dwayne Butcher also references Southern social stereotypes in his rhetorically succinct paintings like You Can’t Be The Fat Redneck Forever. Anthony Lee’s work, The Reclamation of Color, addresses shades of perception in skin tone colloquially used in the Black community to designate social status. Morris-Cafiero’s photographs such as Swing Set, also on view at the Hyde Gallery, examine the social dynamic of body image in contemporary culture. These artists’ works speak to the broad aim of the exhibition because of their ability to draw from localized experience without being limited to it. This “de-territorialization” of a sense of place in individual and collective experience is also an important subtext of Memphis Social.

Memphis is a place, which, like many others, becomes universal in its specifics. The city is a locale, vicariously known and practically experienced. It is important to the world at large that Memphis is a birthplace of the Blues, yet more locally, the blues still lives there. Its being the location of Martin Luther King Jr.’s assassination is significant to the wider public, but in a local context, the struggle for racial and class equality continues. Memphis Social is not ostensibly about Memphis, but the city as a specific environment has proved fertile ground to explore socially engaged artwork. The site of “the social” is a moving target that can pop up in the most unpredictable places. Organizing Memphis Social has taught me to re-orient my own position in ways I couldn’t have rightly mapped. The artists and cultural practitioners I have chosen as my guides to wend my curatorial way through Memphis Social play with sometimes blatant but often subtle relations of the aesthetic and ethical. The meaning of the exhibition is contained in their diverse experiences of these relations.

Tom McGlynn is an artist, writer, and independent curator based in the NYC area. His work is represented in many national and international collections including the permanent collections of the Whitney Museum, The Museum of Modern Art, and The Cooper-Hewitt National Design Museum of the Smithsonian.